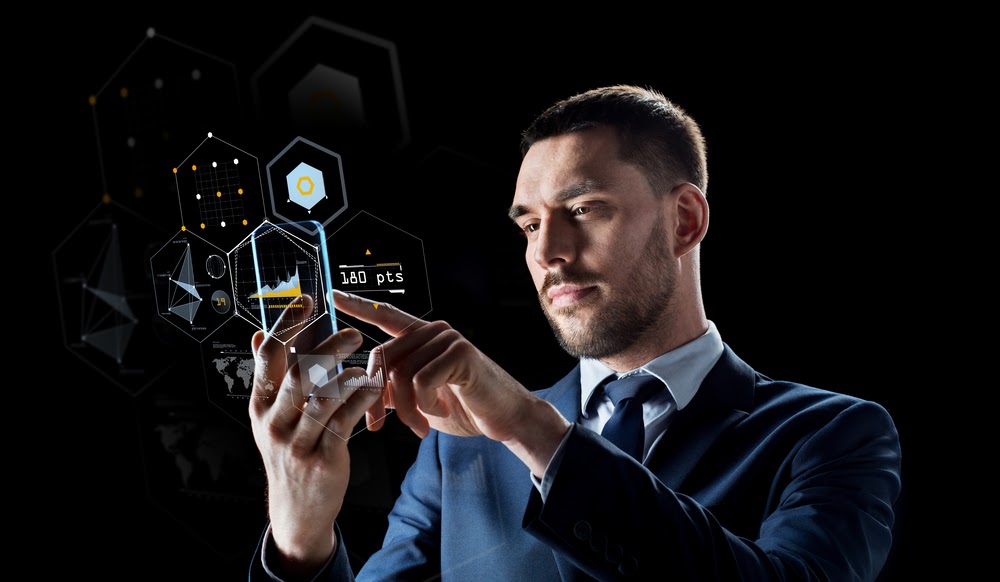 JigSpace (only for Apple devices)

CamToPlan (only for Apple devices)

Use augmented reality to measure spaces, including the dimensions of rooms! This allows homeowners to easily map out their home for improvement projects or just to get an idea about how a new couch or other piece of furniture might fit.

Find the way through augmented reality mazes and puzzles but don’t get zapped by a laser. This app was noted as IndieCade Europe’s Jury Prix winner. Laser Mazer is free to download and is appropriate for ages four and up!

My Very Hungry Caterpillar AR (only for Apple devices)

For children who love the story of the Very Hungry Caterpillar, bring the little friend to life in augmented reality. The colorful caterpillar will appear in the backyard, eating his way through foods and playing anywhere he is placed. Kids can put the caterpillar to bed each night. And then the fun can begin anew the next day. This app costs $3.99 and is suitable for children ages four and up.

Dinosaurs aren’t extinct thanks to augmented reality. Check out life-size dinosaurs roaming around real space. The app can be used with the phone or via a headset. And, yes, it’s free!

Play a stacking game on any surface in augmented reality. This is the standard type stacking game. See how many pieces players can stack before the tower falls! It’s free to download, but the game does offer in-app purchases.

CARROT Weather (only via Apple)

This isn’t just any weather app. It’s a bit crazy and unpredictable. There are games. And users can apparently earn points when there is a fire or some other weather event. The voice of the AR app also isn’t exactly kind, and that’s the point! In fact, some users noted her as sadistic. And, for this reason, it’s suitable for ages 17 and up!

Put GIFs and stickers anywhere. Then take a video of the creation! Get imaginative! The app is aimed for ages 12 and up.

Houzz – Home Design and Remodel (only via Apple)

This is an app for home design, remodeling and decorating. Check out different interior images. It also lets users shop and find professionals to help them for home projects.

Splitter Critters (only via Apple)

This is an augmented reality game that requires players to divide up different environments, rearrange them and then help direct the game critters back into their spaceship. While there are no in-app purchases, the game costs $2.99 to download. But it can be played by ages four and up!

Play mini golf in augmented reality! This is a fun game for mini golf enthusiasts, plus players don’t have to wait for a nice day to play. Just download the game and have fun anywhere…and the game appears in the real world environment. Mammoth Mini Golf AR is priced at $2.99. Kids ages four and up can play…and, of course, adults too!

AR Runner (only via Apple)

Compete and get fit via augmented reality. AR Runner lets users go up against other competitors and hit checkpoints. The game allows runners to set records based on these checkpoints. AR Runner is free to download (there are in-app purchases, though).

Sell eggs, discover secrets in the eggs, hatch the eggs and build homes for hens. Users also have to find drivers! The goal is focused on creating the best (and most profitable) farm. The app is free and is suitable for anyone aged four and up!

This game is based in the wild west. Users will act as a train conductor via augmented reality; they can solve puzzles and experience all the action right in front of them with the aid of augmented reality. The app is $4.99 and is for ages 9 and up!

The Machines (only for Apple devices)

Battle in augmented reality! The goal is to destroy the enemy’s towers and entire base. Users can invite their friends and battle them! This game is for ages 12 and up and costs $1.99.

Augmented reality allows businesses and stores to provide consumers with a unique and immersive means to explore and try out products. Augmented reality helps take the guesswork out of hitting the ‘buy’ button.

With augmented reality, users can swipe paint on their walls (virtually, of course), try on frames for glasses, and even preview makeup and hair colors, too. Some of the businesses and stores that offer augmented reality experiences include:

Ulta offers its GLAMlab via the official store app. This augmented reality experience lets users try on all different brands of makeup. Plus, preview hair colors, too!

IKEA’s app uses augmented reality to let users place furniture in their space. See if a table or new couch fits the room…or flatters the design of the space. Preview many different IKEA products via the app.

Find the perfect color for any room. And preview those paint hues on the wall! The app also lets users find exact paint colors from Pinterest and buy paint, too.

Wayfair offers augmented reality experiences via iOS. Use the Wayfair app to preview items in a room or any home space. The app is free to download, and, yes, users can shop, too!

Users Can Even Use Augmented Reality to Preview Vehicles!

RelayCars lets car shoppers view cars interactively via 3D imagery. But the app also lets users use augmented reality to drop the car into the real world environment. Augmented reality allows for users to walk around the vehicle or even just see what the car looks like in the garage or in the driveway.

Augmented reality can be a valuable tool during the research phase of car buying. Unlike traditional photos, augmented reality displays a three-dimensional image of the vehicle that is to the scale of the real model.

As users can actually interact with the image by walking around it and looking at different details of the vehicle, they can gain more knowledge about the design of the car. They also can use RelayCars to preview different models, too.

Before augmented reality, car buyers would need to visit a dealership to see the vehicle up close. Or they had to rely on photos. Augmented reality allows buyers to size up different models to determine which one might be the best choice.

Then they can do additional research on dealership sites or even Kelley Blue Book to find pricing, features or other details about the vehicle. Augmented reality tools like RelayCars can be used anytime and anywhere; the augmented reality showroom is never closed.

These online tools also may mean that the buyer can spend less time on the dealership or focus on the pertinent business aspects of that dealership visit. Time can be used negotiating, going over financing and, hopefully, buying the car.

Augmented Reality Apps for Fun and for Purpose

Those who have an Apple device can choose from a long list of augmented reality games and experiences. Augmented reality apps also can be used within store apps to help guide purchase decisions.

While some of these apps come with a price tag, many are free. Augmented reality apps are often quite accessible. They don’t require a headset, and this technology can be enjoyed from anywhere.