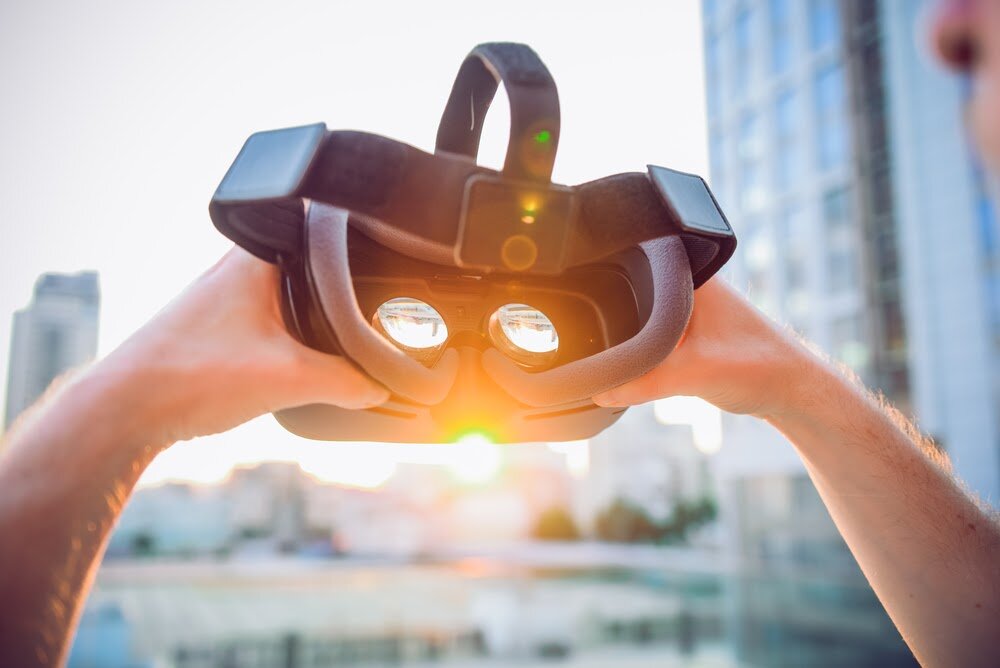 Statista reported that, in 2020, the augmented and virtual reality market was projected to soar beyond $12 billion worldwide and that consumers across the globe were projected to spend more than $6 billion for this technology. From virtual reality headsets to augmented reality video games like Pokemon Go!, technology that embraces aspects of a hyper reality have captivated consumers and transformed the way they view the world.

Speculation abounds regarding what’s next for this tech segment, but consumers who have not yet jumped into the virtual realm might be ready to make a few AR and VR New Year’s resolutions for 2021. How can this technology transform the drudgery of daily habits? Check out all the ways to embrace virtual and augmented reality as a consumer. Just be sure to set a budget!

Resolve to Jump Into the World of Augmented Reality Video Games

One of the simplest ways to experience augmented or virtual reality is through video games. For those who may be unsure about investing in high-tech virtual reality headsets or other savvy gear, games can be an introductory platform to dip a toe into virtual or augmented realms.

The games consumers choose may depend on the tech that they own. Some games work for a specific console, others can be downloaded onto a phone or tablet. Pokemon GO is an extremely popular augmented reality game, and, really, the hunt for these cute Pokemon allows even the most inexperienced gamer to check into an augmented experience.

This game’s premise is simple. Pokemon are hiding in the real world. The game shows the live environment, and the augmented reality aspect is the virtual Pokemon that seemingly pop into random real world locations. Maybe they are hiding in the cupboard, on a table, behind a tree…Pokemon can be anywhere. The phone or tablet uses the camera for a real-time gaming experience.

While Pokemon GO is suitable for anyone four and up, there are a few tips to keep in mind. Players can become so preoccupied with staring at the screen searching for Pokemon that they might not pay attention to the actual world around them, which could lead to accidents and, in some cases, allegedly death. While an augmented realm can transform the real-life environment, gamers also have to be mindful of traffic, pedestrians and, of course, places where trespassing isn’t acceptable.

There are many virtual reality headsets on the market, and some of the most popular per CNET include Oculus Quest, Valve Reverb and HTC Vive Cosmos. Prices can vary considerably, with the Quest being the least expensive (less than $300), and the Cosmos hitting $700.

Why would a consumer need a virtual reality headset? Gaming! While augmented reality games can be an introductory experience to semi-virtual realms, headsets let the consumer step into another world. Virtual reality heightens the gaming experience; players can step into the world of Star Trek, Star Wars, or even virtually climb mountains.

For consumers who invest in virtual reality headsets, game options may vary per brand. Although some games may be compatible with multiple headsets. Not sure what headset is the best one? That’s really a matter of opinion. Consumers can check out online reviews via tech publications or on company sites. If the budget is an issue, then the cost may be the key deciding factor.

Features can vary; some display phone notifications, others show an actual video that appears like a screen in front of the eyes. Again, prices can vary considerably. This market segment also may include new products in future years. Like most technology, virtual and augmented reality is constantly updating and becoming more streamlined…and perhaps even sleeker, too.

In the past, virtual or augmented reality eyewear was limited to bulky headsets. The introduction of eyewear or glasses that look like what consumers wear to read or for vision correction allows this technology to really integrate into the personal fashion and style of daily life. This is a market segment consumers may want to watch…and research.

Unsure about Virtual Reality? Try it Out this Year!

Consumers who are really digging in their heels about this technology don’t have to commit to purchasing any new gadgets. For those who may be not so comfortable with technology in general, investing in a new platform or new device can be a bit overwhelming.

Curiosity about augmented or virtual reality, though, can be explored in museums, stores and even in the car. Most new automobiles include basic components of augmented reality; the backup camera and its grid lines is the perfect example. And these automotive features can make driving and parking a bit safer. Drivers can better understand their turning radius and can see what’s lurking behind the vehicle.

While augmented reality in the car can seem fairly basic, it still may take time for individuals who aren’t comfortable using it to feel at ease. Most older drivers were used to looking behind them as they backed out of a space; the camera does this sight work for the driver. And adjusting to watching the screen instead of looking out of the rear window might be a difficult change.

Even beauty stores are in the augmented reality market. Consumers can upload their photo and try on new lipstick or other products. No need to worry if that berry shade is going to flatter, just try it on! Both Sephora and Ulta offer consumers the chance to virtually preview cosmetics.

Museums also could provide virtual exhibits that take the visitor into a new world or experience. Those stuck at home can still enjoy cultural experiences, though. There are many virtual tours online that take visitors to historic and iconic sites…and these trips can be enjoyed from the comfort of home! Explore the Amazon Rainforest, Mesa Verde, the Tower of London and more!

Resolve to…Accept the Rise of Virtual!

Most Americans likely cannot wait for the moment when the world goes back to pre-Covid normalcy. The pandemic has limited—or perhaps completely halted–visits to entertainment venues, museums, restaurants and maybe even the office. The days of browsing leisurely in a store seem ages ago. Yet while the pandemic has upended the very definition of normalcy, it also has helped consumers embrace technology platforms that mimic these experiences.

Consumers might have relied on those virtual try-on apps offered by stores. They also might have utilized virtual showrooms for browsing automobiles when shopping for a new car. In-store experiences were the reality of the past, and online shopping experiences became the Covid norm.

Has the pandemic changed shopping forever? When the pandemic subsides, shoppers may once again flock to the brick and mortar locations. However, many may believe that online experiences are more convenient. Visiting a store could be a trend of the past for these consumers.

The pandemic also transformed the way Americans work. Many companies implemented work-from-home practices during Covid, and many employees may continue to use their home as their office space. The rise of virtual conference platforms became mainstream, and, really, a necessity.

Meetings now showcased employees with unique backdrops to add some fun to the daily work routine. Backgrounds for virtual conference platforms could include beach scenes, holiday scenes, cartoon scenes, nature scenes and more. Workers could make it appear as though they were part of a popular show, on a tropical vacation or lounging in a lush locale.

Work-from-home setups might have been a money saving option for some companies. And the virtual workforce could become much more accepted than it was in the past. The prominence of virtual and augmented reality platforms in daily life means that this technology could be here to stay.

Those who are hesitant about virtual and augmented reality may need to accept that these platforms may become even more prominent in the future. Resolve to accept the rise of virtual!

In the automotive market, virtual and augmented reality are utilized for many different capabilities. Augmented reality helps mechanics make repairs through the use of special glasses, manufacturers use virtual reality to aid in the car design process, and, in the future, augmented reality may be used for avatar passengers to join during a drive.

The future in the automotive sector is very much virtual. Consumers shopping for a new car need to be prepared for tech savvy features that include augmented reality or virtual reality. While virtual experiences—especially holographic avatars—are not yet a reality, augmented reality is wired into many new cars.

When shopping for a new car, consumers have to understand that these features are more prevalent than ever. And augmented reality in many cars goes beyond the backup camera. Some vehicles feature numerous cameras that allow drivers to see many different vantage points.

Cars also connect to handheld devices like smartphones. The phone allows maps and other GPS capabilities to be displayed on the screen near the dashboard.

When new tech is introduced by manufacturers, these features could be offered as an upgrade. But eventually, they may make their way into standard features. The backup camera was once an upgrade, now this safety feature is standard on many new models.

Having the choice to adopt a virtual or augmented reality lifestyle can allow consumers to slowly adapt to it. The future may bring incredible changes, and we may have virtual tour guides joining road trips. Or perhaps screens that project a conference call.

When shopping for a new car, consumers may inquire about augmented reality features to learn more about this rising technology. This doesn’t mean that every consumer can splurge on these features, but dealerships may allow shoppers to preview the new options. Again, today’s upgrades may be tomorrow’s standard features!

For some consumers, virtual and augmented reality features and technology are simply not a priority. Others, though, may jump on the virtual bandwagon with gusto. This is where understanding any spending limitations may come into play!

If there is no budget, have fun! However, most consumers don’t have the luxury of a bottomless account. For consumers who want a virtual reality headset, wish to try out augmented reality games or completely deck out their car, understanding financial limitations can help ensure that they don’t spend more than they can reasonably afford. Knowing what is affordable helps keep the purchase impulse in check…hopefully.

Every consumer’s budget may be different. And spending habits differ, too. Some consumers are comfortable setting up payment installments on new items like virtual reality headsets, others want to only pay what they can afford to spend in one lump sum.

With new technology, however, it can be really easy to get caught up in the cool factor. Having the latest greatest tech may be appealing. It also may be really tempting to hit the buy button when shopping online. Take time with the purchase, do research, set the budget and…hunt for sales!

Sometimes the best deals for new tech items can be found in last year’s model. For those wanting to try a headset or a new game, earlier models or games can be cheaper! Stores also could offer sales after the holidays. So waiting may be a game changer.