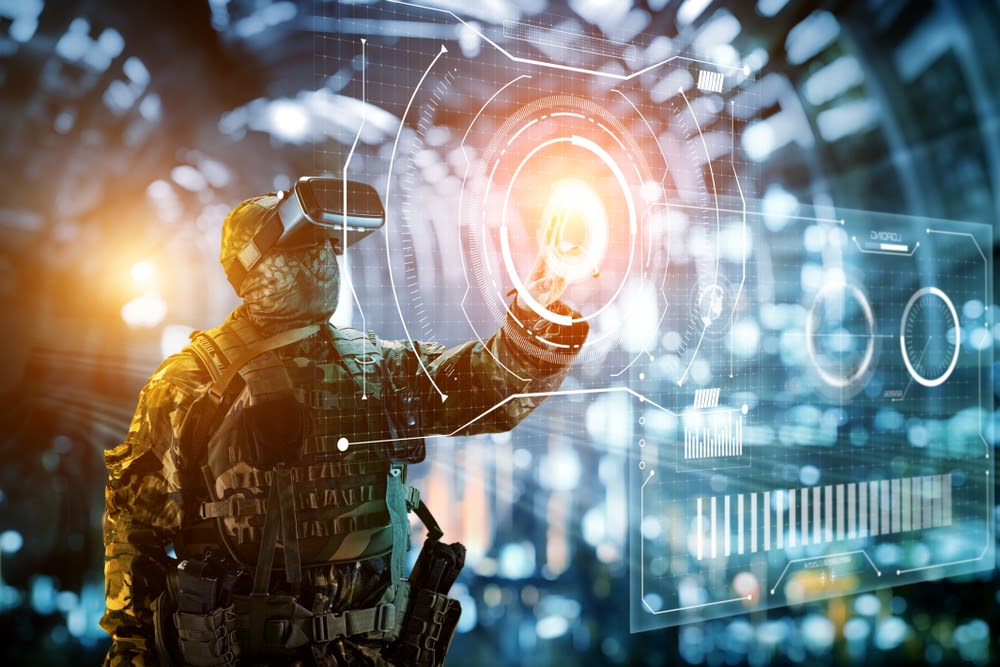 Augmented and virtual reality platforms are often used to simulate real life experiences for training employees. Virtual reality platforms are also used in the medical field to help doctors safely expose patients suffering from anxiety or post-traumatic stress disorder to experiences that make them anxious (this is called exposure therapy). Now the military is about to use extended reality to provide data and visual enhancements to troops. The Army’s augmented reality may be the future of military tech.

In March, the Army announced a more than $20 billion augmented reality (known as “Integrated Visual Augmentation System” or IVAS) deal with Microsoft for augmented reality headsets that would include night vision and cameras among other features.

CNBC reported that the new headset is similar to Hololens in that it overlays data on top of the actual environment; however, the IVAS also included (per a CNBC reporter’s demo in 2019) a compass, map, night imaging and could even include weapon data (e.g. aiming).

“The IVAS aggregates multiple technologies into an architecture that allows the Soldier to Fight, Rehearse, and Train using a single platform. The suite of capabilities leverages existing high-resolution night, thermal, and Soldier-borne sensors integrated into a unified Heads Up Display to provide the improved situational awareness, target engagement, and informed decision-making necessary to achieve overmatch against current and future adversaries,” the Army stated in the press release. “The system also leverages augmented reality and machine learning to enable a life-like mixed reality training environment so the CCF can rehearse before engaging any adversaries.”

What About Other Military Branches?

Will the Marines, Navy, Army Reserves or other branches of the military also utilize augmented reality? Currently, only the Army has announced plans for augmented reality. However, according to The Drive: “The U.S. Marine Corps and U.S. special operations forces might also piggyback onto those orders in the future.”

The History of IVAS

Back in 2019, ArmyTimes reported on the Army’s and Marine’s exploration of the Integrated Visual Augmentation System (IVAS); The Times actually was able to use some of the devices. The details on the technology’s capabilities—even two years prior to the Microsoft announcement—could showcase the future of military technology.

According to ArmyTimes, IVAS could show the location of teammates or squads (this is in real-time) and users could also mark enemy sites and other information using symbols.  Essentially, the maps could include data that could alert squads and aid them. ArmyTimes explained that these symbols or marks even show up on the real environment (without the map). So data doesn’t just disappear.

As the story was reported back in 2019, technology has likely changed…and the new headsets could be even savvier. What the final product looks like might only be known to the military, however.

A Look at Augmented Reality and Training

The development of IVAS for the Army could provide yet another tool for training, which could help soldiers better prepare for future scenarios. With augmented reality and virtual reality, training platforms are simulated to allow users to learn how to react and prepare…without, of course, putting anyone in danger.

While the headsets for the Army could be used in different ways, augmented and virtual reality is often integrated by businesses as part of training platforms and perhaps even new employee onboarding. Virtual reality allows employees to enter a simulated environment with the aid of a headset that allows the employee or interviewee to experience aspects of the job or face tough situations…without the actual real-life stress of that situation.

With virtual simulations, employees can learn how to handle a robbery or maybe just a tough customer. While a face-to-face real experience could leave an employee tongue-tied or maybe even flustered, virtual reality allows them to face these same issues in a safe environment. Screw-ups can mean that maybe the employee needs to rehearse and go over the situation again.

For employers, these simulations could mean the difference between a really frustrated customer and a tense situation to a more relaxed interaction and a happy customer. A mistake in virtual reality isn’t the end of the world…or the end of the job. It could simply mean the employee needs more training or more practice.

Even automotive mechanics are using augmented reality glasses! Mercedes-Benz technicians are assisted with augmented reality glasses that can connect with a support team. The glasses can show the remote team what the tech sees to provide help to the tech during repairs. Once again, this saves the tech time flipping through a manual or halting repairs to call remote experts. The glasses seamlessly connect the service tech and the remote experts.

While the military and businesses embrace augmented reality, this technology is used by individuals every day. Whether they know it or not. Augmented reality can help keep drivers from backing into an obstacle and it may help navigation, too.

Backup cameras don’t just show what’s behind the car, but they also show how that car will turn. Grid lines show the turning radius, and this can help a driver eyeball the best angle for backing out of a tight spot. Front cameras offer the same capabilities. Those small cameras could help drivers from nicking their bumpers or scratching another car while navigating tight parking lots.

Some vehicles also include smart rearview mirrors that aid visual acuity at night. Instead of seeing the reflection in the mirror, smart rear view mirrors access the rear camera to show a well lit and clear image of the back of the vehicle.

Even GPS systems could infuse augmented reality. Some systems include graphic overlays on top of the image of the real road or street view. Some may include arrows to indicate when to turn. In addition, some newer vehicles also could include navigation data that also shows augmented reality data that highlights bikers, speed and other information to help keep drivers safer on the road.

Virtual and augmented reality may be upgrading jobs, training and even everyday activities like driving. As this technology is adopted by more industries, it may become an accepted norm.

Not only will individuals find this technology as part of job training in some industries, but it also follows drivers on the road in many vehicles. Even online shopping experiences are upgraded with augmented (or virtual) reality features. Augmented reality can let consumers preview different products –including paint colors on their walls.

Augmented reality, though, also can help individuals get fit. Apps like Zombies, Run! lets users run away from augmented zombies. Yes, the zombies appear in the environment…and this may help challenge runners or even fast walkers to pick up that pace. Ghost Pacer also can help runners beat their time and challenge their limits with augmented reality competitors.

Augmented reality also can help individuals find out data about the world. Use apps to better understand the stars in the sky. Or even peek through the other side of the Earth and find more about what exists on the other side.

Education could get augmented or go completely virtual, too. As Covid forced many schools to hold classes virtual, the idea of learning from home isn’t so foreign to many families any longer. Perhaps the future includes real virtual learning environments. Students don a headset and sit in a virtual classroom. Or maybe the teacher is augmented into the student’s environment.

Even drives could be augmented to include friends and family, as avatars of companions may appear in the passenger seat during a long journey to keep the driver company (Nissan’s Invisible to Visible is working on this!). Augmented reality and virtual reality also could augment the world in ways we could only dream…because who knows what the future holds.