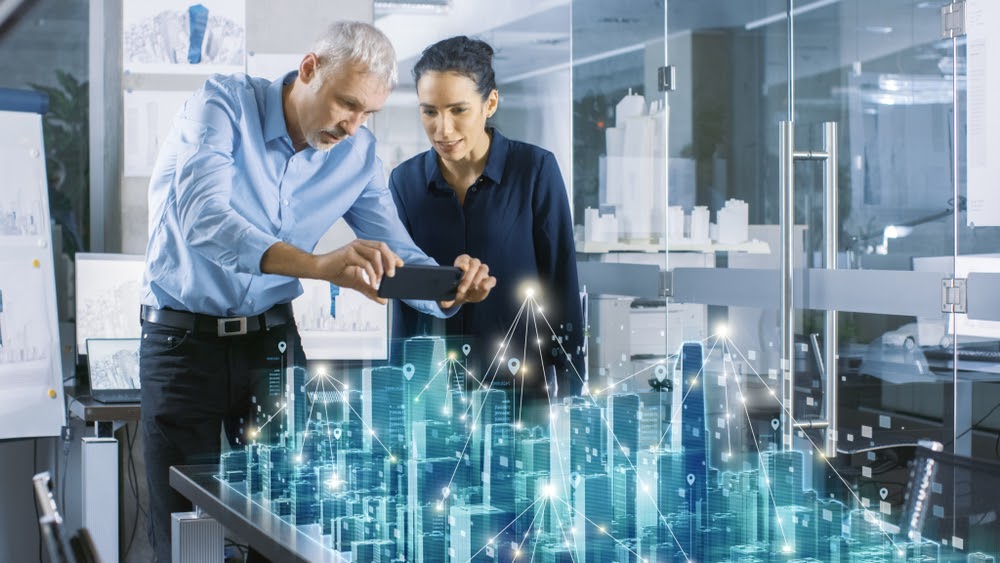 Augmented reality is used to allow consumers to preview products on their faces, in their homes, and, in the case of automobiles, in their garage or driveway. This technology also immerses gamers into the adventure by transporting characters into the user’s natural environment.

Augmented reality also is used to showcase building designs before they are even built. Augmented reality architecture programs overlay new design concepts over the existing space to show homeowners the renovation transformation before it even happens. These programs also can preview a new building in an open space, too.

Bring sketches to life! AR Sketchwalk showcases sketches in AR and overlays them into the actual environment. This program can help clients understand how the idea on paper will translate into 3D reality. Clients also can also take an augmented reality tour of the sketch designs. Like most augmented reality programs, when the concept is dropped into the real world, users can actually walk around the 3D image.

ARki is classic augmented reality in that it allows architects to showcase the design in the real environment. ARki drops in the model and allows clients to see the concept before construction. The program also can be used in presentations. The app is available via both Google Play and the App Store.

This app isn’t for presentations or even to aid in the visualization of a project. Wireframes focuses on displaying architectural art. The app showcases many different projects in an exhibit format and tells the story behind the artistic concept. Participating artists include dBox, Studio AMD, Neoscape, Mir and more.

This app is compatible with Google Sketchup and Autodesk Revit to showcase blueprints as three-dimensional models. Augmentecture takes the two-dimensional blueprint and brings it to life as a building, as constructed in model form by the architect! The app is available via Google Play and the App Store.

ArchDaily listed augmented reality measuring tools as a resource for architects, too. These handy apps will overlay digital graphics to help accurately measure rooms and other spaces. It’s a bit like an augmented reality tape measure! But perhaps a bit less cumbersome!

Another program mentioned by ArchDaily, GAMMA AR is a construction app that can be downloaded via Apple and/or Android devices. The app can be used at construction sites to project BIM model data via augmented reality on in-progress builds…or even before construction begins.

Augmented reality apps used by architecture firms enable clients to visualize projects before construction begins, and, with some software, as it’s in progress. This takes the guesswork out of understanding the final outcome.

However, some software programs like GAMMA AR also note that they can help reduce costs associated with errors during the build process. Visualizing data throughout the process could help architects and builders understand if something has gone amiss. For example, GAMMA AR explains that the graphic data can be projected during a walk through and comparisons can be made between the projected data and the actual construction.

Augmented reality isn’t just used to showcase the architectural designs of a project, but this technology also can be used for interior design, too. While architects can use augmented reality to compare construction to the original project design or to even preview a sketch in 3D for a client, interior designers can use the technology to help clients to graphically transform the look of a space.

Some augmented reality interior design apps are intended for consumers, while others might be meant for enterprise (business) implementation. Apps for the consumer can be found via both the App Store and Google Play.

So how do these interior design apps work? These apps are actually really easy to use, and quite fun to implement…even if the consumer isn’t ready to make any lasting changes.

Some stores and paint manufacturers let consumers use augmented reality to preview paint colors in any room’s walls. These apps let consumers choose from any hue; if it can be mixed, it can likely be previewed on walls. Paint magically swipes onto any wall via augmented reality. This helps the consumer determine which hue will flatter the room, or what colors might clash with furniture.

There are a few stores that let consumers use augmented reality to drop furniture or other items into their space. These apps help the consumer understand if a table, couch or other item will fit or flatter the room.

Apps usually allow for consumers to select many different styles of furniture and different items. So consumers can play around with different looks and find out what looks best. This isn’t just fun, but it also can help consumers find a look that doesn’t result in a design fail…for businesses, this could mean fewer returns.

Interior designers and design professionals also could use augmented reality apps in similar ways that architects use them…to preview final designs. Some homeowners want to transform a room or space. This could mean removing a wall, adding crown molding or other design elements into the room. Augmented reality could be used to help the design ideas come to life.

For those who watch shows like Property Brothers, 3D previews are often used to show homeowners how the final design should look. This helps homeowners decide between different plans or ideas.

The app Myty lets users choose from different furniture and give rooms a complete makeover. Change walls, the ceiling and even add floor coverings! Myty also can create doors or windows in a space to provide homeowners with an understanding about how these additions could add in light or maybe even the feeling of an open floor plan.

What About Virtual Reality?

Many augmented reality apps, however, are accessible via phones and tablets. Many can be deployed using these handheld devices. This means that designs could be viewable to clients without carrying any extra equipment.

Virtual reality, though, could be used in the office environment during meetings between clients and the design firm. With virtual reality, collaborations also could take place remotely meaning that firms with designers in different spaces could meet up even with thousands of miles between them. The same could be true for client meetings.

Automobile manufacturers used virtual reality to design vehicles during the pandemic. This allowed executives to collaborate in a virtual space and analyze the 3D designs of new models, critiquing what worked and what might need to be changed. In this way, virtual reality also could be used among architects and other designers.

Enscape is a virtual reality platform used by architects; it works with Revit, Sketchup, Rhino, Archicad, and Vectorworks. The platform allows architects to create virtual reality experiences for client meetings and presentations.

While augmented reality overlays a rendering in the real space, virtual reality actually transports users into another realm. In this virtual realm they can interact with designs.

Using augmented reality apps can aid architects in showcasing project ideas and bringing these ideas to life before a client. Apps can allow clients to walk around a building or even show if a project is progressing according to plans.

Graphic overlays can be used not only to show 3D depictions of buildings but to also show what an area should look as construction is progressing. Augmented reality could help architects, designers and those in construction ensure that the updates are following the design protocol.

In addition, interior designers can use augmented reality apps to show how a space can be transformed with new carpeting, a different wall hue and furniture. Apps can let designers or homeowners add in windows or even doorways.

Some stores offer their own augmented reality tools that are designed for the consumer to preview products in their space. These tools let homeowners virtually add paint to walls and furniture into a room.

Augmented reality provides an immersive experience that can aid design and build processes by showcasing the vision before it is even built or executed. Clients can even dive into design concepts through virtual reality and explore the architect’s vision.

With the aid of augmented reality, architects can bring their ideas to life and transform their drawings into the conceptual reality that only existed in their imagination or within their 2D sketches. Augmented reality displays the reality of the mind and allows the dream to take shape and, eventually, become a reality.