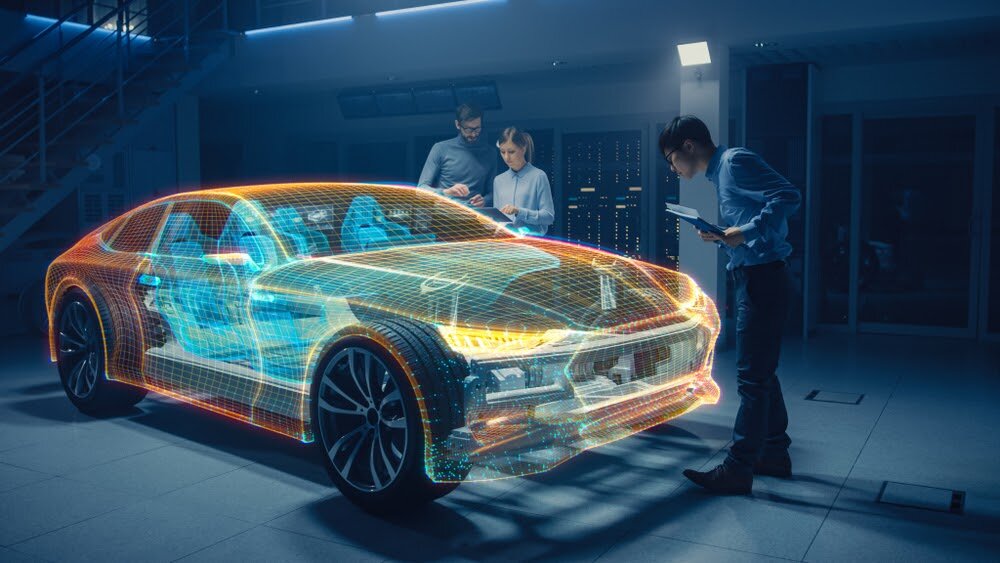 Augmented reality features are standard in many vehicles. The grid lines on the backup camera screen that show the turning radius of the vehicle is one common example regarding how automotive manufacturers utilize augmented reality to aid drivers.

Many manufacturers go above and beyond these standard features and include upgraded elements that are punctuated by augmented reality technology. Luxury car models may offer advanced graphic displays and high-tech features that allow drivers to see around and behind the vehicle…with grid lines detailing everything.

Here’s a comprehensive look at augmented reality automotive enhancements by manufacturers to showcase how this technology is driving and enhancing our vehicles, the way we view them and maybe even how we buy them.

BMW utilizes augmented reality beyond the actual vehicle. Mechanics working on BMW models are assisted in their work via augmented reality glasses. These glasses let mechanics communicate with remote teams and the glasses can bring up docs with info on the vehicle; Driving explains that this includes “technical bulletins.”

Another site reported that in early 2020, BMW introduced its BMW i Interaction Ease, which is described as “a concept cabin for autonomous vehicles that combines an AR windshield, a contextual user interface, intelligent lighting, and a luxurious adaptable interior that looks more like a hotel suite than a passenger vehicle.” Posh! And extremely cutting edge!

Daimler is the manufacturer for Mercedes, which is, of course, a luxury brand. Daimler offers the Mercedes cAR app. Powered by augmented reality, the app allows consumers to browse Mercedes models in 3D. One of the designers noted that users can create their car and “…drive it through the room.” Yes, the car can appear in your living room…or kitchen.

Slash Gear wrote about the Heads Up Display (HUD) for the Mercedes S Class (2021). The site noted that this will be “…the first production luxury car to feature a heads-up display powered by augmented reality.”A picture for the HUD showcases how AR will benefit the driver. A turn in the road is shown on the picture posted on the site, and the overlay data shows speed, directional arrows, and presumably the suggested speed for the turn.

Like many manufacturers, Ford’s models might include backup cameras as a standard feature. These cameras typically include overlay grid lines that show the turning radius. However, other cameras including those displaying front visual data also could be included (depending on the model).

Ford’s unique augmented reality history, however, isn’t just about the data within the vehicles. Instead, Ford has made headlines for its use of augmented and virtual reality in car design. Ford’s Joel Piaskowski talked to Automobile Magazine about using virtual reality headsets to view in-progress models when executives had to work from home during the pandemic. Ford also uses HoloLens for car design; The Verge notes that augmented reality enables the team to display design updates on a car model (the actual car…not a model). Augmented reality gives the team a preview so they can see if it works!

Fiat Chrysler has an Immersive Virtual Reality (iVR) lab. The lab is listed under the Research & Innovation section of the company’s web site, and photos show how team members use the virtual space for various needs. In Turin, Italy, FCA also has the ImMErsive Technology room, “…where engineering and manufacturing teams can interact with the virtual twin of a plant, focusing on the layout of an assembly line, the placement of giant robots in the body shop, or the functionality of an individual workstation.”

General Motors is looking at augmented reality HUDs for electric vehicles; the Wall Street Journal reported that GM (the venture capital side) acquired a ‘minority stake’ in Envisics, Inc.
What about current features for GM models? Since GM is the parent company for brands like Chevrolet, Buick, Cadillac, and GMC, features may differ by brands and, of course, by model, too. However, backup cameras may be standard. And more advanced camera systems with AR components may be available, depending, again, on the model.

Who is Geely? The company owns Volvo. We can, again, talk about typical AR elements for cameras, but for Volvo, talking about AR should focus on the partnership with Varjo to use headsets to evaluate safety features and assist in development. Volvo’s press release talked about the company’s investment in Varjo (through the company’s venture capital fund, Volvo Cars Tech Fund) and explained in detail how headsets were used:

“Compared to its predecessor, the XR-1 adds high-definition cameras to the headset and enables mixed reality. This allows Volvo Cars designers and engineers to ‘drive’ future cars and evaluate all features in a simulation environment many years before they exist, enabling the company to develop the safest cars with the most refined user experience possible.”

Years ago, Honda introduced HondaLens, an augmented reality journey into the Honda Accord’s history that also touched on the newest updates found with the 10th-generation Accord. HondaLens was showcased at the 2017 Los Angeles Auto Show.

The latest from Honda? That might be an augmented reality steering wheel! According to Techeblog, the steering wheel controls braking and acceleration!

The Drive reported that Hyundai and Porsche were investing in augmented reality company startup WayRay. The site discussed the demo the companies (Hyundai and WayRay) gave at CES back in 2019 and that this could lead to an AR windshield in Hyundai models that might show drivers pertinent navigation data. The site noted, though, that “Hyundai would not say if the AR system will ever go into production, only that it will continue working with WayRay to refine the tech.”

Not sure if an electric car is for you? Kia has an app that may help you decide. Go Electric helps address all the questions that potential buyers might have about the electric models. The app lets users create their own electric car and preview the car in the real world; users can explore the car’s features, too.

As electric cars are becoming more popular among consumers, Go Electric may help customers better understand all the benefits.

According to Mashable, Nissan’s getting ‘freaky’ with augmented reality. Mashable wrote about the Invisible-to-Visible Technology that Nissan is developing. Why does Mashable consider it ‘creepy?’ The new tech would allow for virtual avatars to join drivers on the journey. The Invisible-to-Visible technology can project blue skies on windows during not-so-nice days. And the technology also lets drivers peer around corners to prepare for any obstacles. Is it creepy? No way! It may be a cool future of augmented or virtual reality driving experiences.

In 2019, Renault began using augmented reality headsets to aid technicians in repair. The headsets allowed communication with the company’s tech support so technicians could always have access to assistance. CommercialFleet explained that “It will also enable them to capture images and videos, playback training videos and refer to manuals.” The AR experience is a bit like having reference manuals and a live assistant in one place…without picking up the phone or flipping through a manual.

Suzuki brought augmented reality to motorcycles. Back in 2013, the company offered an app to let users preview its V-Strom 1000 in different colors and with different features. While today these apps are fairly common, seven years ago they weren’t common…and especially not for motorcycles.

In partnership with Saatchi & Saatchi and Vertebrae, Toyota offered an augmented reality shopping experience. Customers can preview their car in a real backdrop. And the experience lets individuals look at the vehicle from any angle…Vertebrae notes that they can “walk around the vehicle.” Prospective buyers can use the experience to view the Rav4, Prius and Tundra.

Proving that anything can be possible in the future, Electrek reported on Elon Musk talking about the potential for augmented reality in Tesla automobiles. Musk wasn’t talking about a HUD or some other navigation feature…he was mentioning AR games! Augmented reality games…in a Tesla! But it was VR Scout that posted Musk’s tweet, which read:

“Anyone think they can get good multiplayer Minecraft working on Teslas? Or maybe create a game that interacts virtually with reality like Pokémon Go while driving safely? Like a complex version of Pac-man or Mario Kart?”

If self-driving cars become the future of Tesla, playing augmented reality games in the car while the system is driving could be an entertaining way to pass time during a long commute.

Per a story in The Verge, in 2015, Ferrari (with Zspace) introduced the Ferrari AR app. Typically with brand-type apps, the user would create their car or change out colors, features, etc. using a virtual car in the app– a build-your-own element. Ferrari’s app worked in the actual showroom. With a tablet, the user could grab an image of a car in the showroom and modify it via the app. This made shopping—and customizing—a bit easier…and probably more fun, too. Another cool feature? The Verge reported that users could x-ray the car and see different mechanics inside.

“Tech Live Look” is augmented technology that’s geared for aiding technicians in repairs. Specialized glasses let technicians magnify tiny details during repairs, and the glasses will even illuminate shadowed areas to make visualization easier. Technicians also can send images of the issues to a team in Atlanta for extra assistance, according to a press release from Porsche. What the repair tech sees, so, too can the team in Atlanta.

What Augmented Reality is in Your Car?

Every manufacturer has delved into augmented reality differently, and in a way that works for their brands. Some used augmented reality in design, others used it for repairs or to heighten the shopping experience.

As technology advances, augmented reality features and virtual reality features may become a regular part of our drive. Nissan’s Invisible-to-Visible technology could become a reality in future models; drivers could have virtual companions in the car with them. Windows graphics could be used to make the cloudy days appear a bit brighter.

If cars become self-driving, we could play augmented reality games during the commute. While some of these ideas sound space-age, are they really? Twenty years ago, many of us probably didn’t anticipate cameras would be a standard feature for cars. Yet, they are for many makes and models. We also once viewed a GPS as an expensive investment. Now our phones have convenient maps that can be connected onto the dash screen of our cars.

What about Virtual Reality?

While many manufacturers utilize augmented reality in-car features, virtual reality could be a part of the driving experience of the future, too. Again, if self-driving cars become the norm, we could have a variety of virtual experiences during the drive that are available to passengers.

Virtual reality features could include virtual companions; maybe a sibling can pop up into the car for a virtual conversation. Their avatar could be displayed in a spare seat. Perhaps we could order food during our leisurely drive and maybe a friendly restaurant rep digitally appears in the car. Even emergency phone calls could involve the projection of a person to provide more comfort during a stressful, scary experience.

Augmented reality is part of many drivers’ daily experiences. However, it’s very likely that more augmented reality features will wire into our vehicles. And virtual reality probably isn’t too far behind.