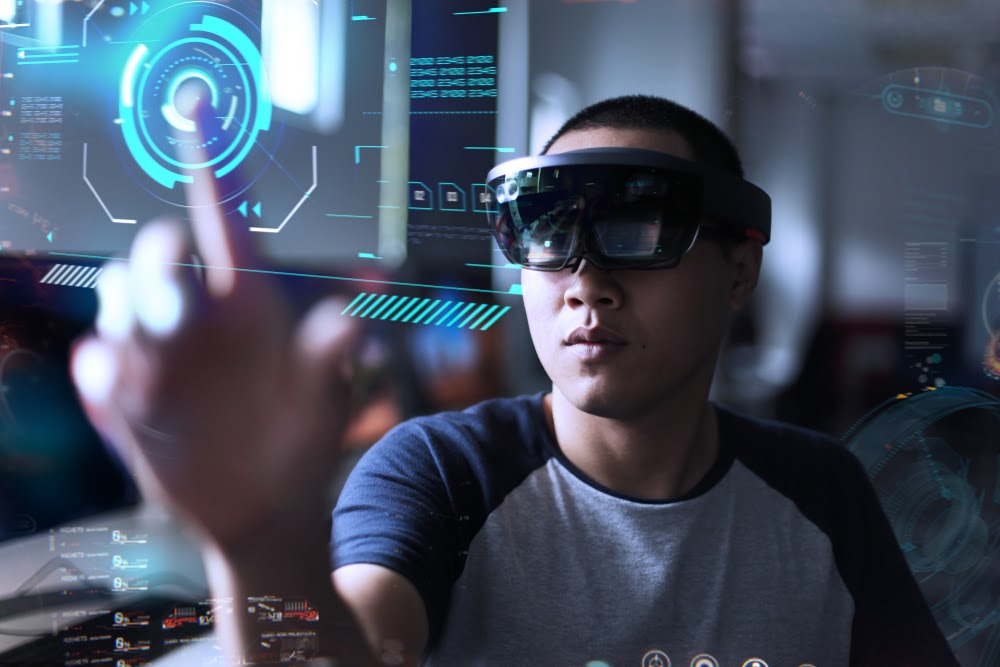 Consumers might be waiting patiently for consumer-based augmented reality glasses to be announced from one of the many tech giants. However, businesses have access to augmented reality and mixed reality solutions thanks to headsets and glasses designed specifically for enterprise use.

Microsoft’s mixed reality and augmented reality HoloLens is one of the leading headsets that offer businesses an immersive solution to training, collaboration and more. Here’s how different businesses and industries use HoloLens to elevate the employee experience.

HoloLens isn’t a small pair of glasses, but it also isn’t a huge bulky headset. This technology is a bit of a hybrid between a headset and glasses; it’s sleek, but not too cumbersome for the wearer.

Microsoft’s HoloLens is designed for enterprise use and features mixed reality technology. Holo refers to holograms; in many ways, mixed reality is a mix of reality and holographic images.

HoloLens is only for enterprise use; in fact, Microsoft highlights three major industries for its use:

The price of the headset varies by model. The headset is offered in three models: HoloLens 2, HoloLens Industrial Edition and Trimble XR10 with HoloLens 2. The three different options are unique in their usage design.

HoloLens Industrial Edition is designed for clean or hazardous areas (think healthcare/medical), while Trimble XR10 with HoloLens 2 is designed for dirty or noisy areas like construction zones or manufacturing.

The healthcare industry uses HoloLens in many different ways. Some use the technology for simulations, others use it for aiding in anatomy lessons, ultrasound simulations and even helping neurosurgeons more remove brain tumors.

For CAE Health, HoloLens helps create realistic simulations. The headset can let clinicians walk through procedures via mixed reality. CAE uses it for ultrasound simulations, and organs can appear in front of the clinician. This lets the user rotate it or even view it larger.

The university uses HoloLens to help students immerse in anatomy lessons. The HoloLens technology would replace the standard cadavers that students typically used to explore, understand and learn anatomy. Developers from Case Western spoke at Microsoft’s Build conference and discussed how the tech could be used to simplify the learning process and to even teach remotely.

MedTrix emphasized how HoloLens was aiding neurosurgeons in removing brain tumors during surgery:

“HoloLens 2 can create 3D holographic images of the patient’s anatomy from the scans taken earlier. These holographic 3D images can be moved around to see from different angles, thus providing the surgeon with a better idea of the tumour’s spatial position.

HoloLens 2 allows surgeons to view a holographic picture of the patient’s brain over the patient’s head in a surgical environment. In fact, multiple surgeons wearing the HoloLens 2 headset can look at the same image from different angles.”

In the manufacturing environment, loud machines can deter learning. In addition, ineffective communication could lead to more downtime and decreased productivity. Augmented reality and mixed reality can help aid techs in repairing machines or even simplify training and other jobs, too.

Here’s how the manufacturing industry is using HoloLens 2:

The online hub that reports on the manufacturing industry detailed how HoloLens is aiding Delta ModTech thanks to mixed reality. The site explains that while augmented reality overlays graphics on top of the real world environment, mixed reality actually begins in reality. Then the technology—in this case HoloLens—allows for lots of data to be viewed.

Delta ModTech uses the headset to include documents, videos and more. HoloLens is used in training, in Factory Acceptance (FAT) Testing to allow some to participate remotely and to aid in fixing machinery (i.e. troubleshooting).

ComputerWorld explained how Lockheed Martin benefited from the HoloLens technology during the final assembly of the spacecraft. According to ComputerWorld, HoloLens could measure, plan and prioritize work. This meant that workers could focus on the ‘build’ aspect.

The computer chip shortage after the pandemic affected numerous industries, but it hit the automotive industry especially hard. However, Intel is using HoloLens to boost computer chip production by helping workers see specific instructions and directions. Video of the HoloLens use was taken from the company’s Ireland factory.

Lessons may come to life with HoloLens. Here’s how HoloLens is transforming education with mixed reality.

Not only is Case Western’s use of HoloLens impacting healthcare, but it’s also transforming education. Students are using the headset to view anatomy; not only does this provide more immersive instruction, but it also means that students no longer use a standard cadaver.

CNET reported that the all-girls school in Singapore is using the HoloLens to safely learn about how nuclear radiation can affect the environment, specifically plants and animals. Students use the headsets as they role play as ecologists and geneticists; they are tasked with studying the effects of radiation from around a nuclear power plant. Of course, nothing is real; the lesson is completely mixed reality. However, the immersive lesson allows students to learn by doing. The nuclear lesson is part of the school’s biology studies.

This company is designing an educational app via HoloLens that will allow students to see a volcano or even a tsunami. Graphics allow for interactive and immersive learning for different science subjects and curricula.

HoloLens is used across numerous industries in a variety of different ways. HoloLens can aid med students in exploring and learning about parts of the anatomy, help students explore science lessons in an immersive element, and help simplify repairs and aid in the manufacturing process.

Virtual reality also could provide employees with the opportunity to master difficult tasks, without affecting productivity. If an employee is having a difficult time learning a concept or technique for the job, virtual reality could allow them to go through the simulation to perfect their skills.

Virtual reality, augmented reality and mixed reality could be a tech-savvy solution for businesses to streamline processes and, in the case of manufacturing, even minimize downtime. For example, before the launch of these headsets, techs would have to flip through manuals or have another employee guide their repairs.

With HoloLens or other glasses, repairs can be simplified because the data and instructions can appear before an employee’s eyes. Graphics also can be superimposed onto machinery; of course, this data is only visible to those wearing a headset or glasses.

Companies like Lifelique are creating apps for HoloLens that allow students to immerse into lessons. HoloLens also is being utilized to allow students to role play as geneticists or biologists as they study the effects of radiation from a power plant.

Could schools embrace this immersive approach to learning? For private schools, headsets and augmented reality technology could be a means to elevate learning and to help students learn by doing.

For public schools, though, the cost of these headsets could be a barrier to more mainstream usage. However, if augmented reality and mixed reality headsets become embraced across many different educational institutions, the technology could weave into public schools.

Computers were once an expensive investment. Many public schools likely only had a few per classroom. As computers became mainstream and the cost decreased, schools began to implement one-to-one computing. How many public schools provide laptops or Chromebooks to each child? Lessons are done online; homework is turned in online, too.

Augmented reality headsets could—in the future—become the new computer. Perhaps lessons will feature an augmented reality component. Students may explore their world using headsets and watch as volcanoes appear in front of them.

However, more companies also would need to develop immersive learning apps to work with HoloLens and complement the curriculum. Imagine, though, having history lessons come alive. Maybe past presidents narrate their lives or students see a model of the White House appear before them.

HoloLens and augmented and mixed reality are transforming education, healthcare and manufacturing. However, in the future, the use of these headsets could become more widespread. As more industries and more companies begin to understand how this technology can simplify processes, perhaps many employees will be donning headsets or glasses.

Technology evolves, and HoloLens and its competition will evolve, too. The future of augmented headsets may mean a portal into the metaverse. Perhaps in the future educational experiences or enriching activities will be hosted in the metaverse. Headsets already can aid in remote collaboration, but perhaps this remote access will be heightened.

For now, though, augmented reality technology has the power to provide immersive solutions, simply processes and transform learning to provide experiences that are beyond reality.