Here’s How Teachers Can Use Augmented Reality in the Classroom! 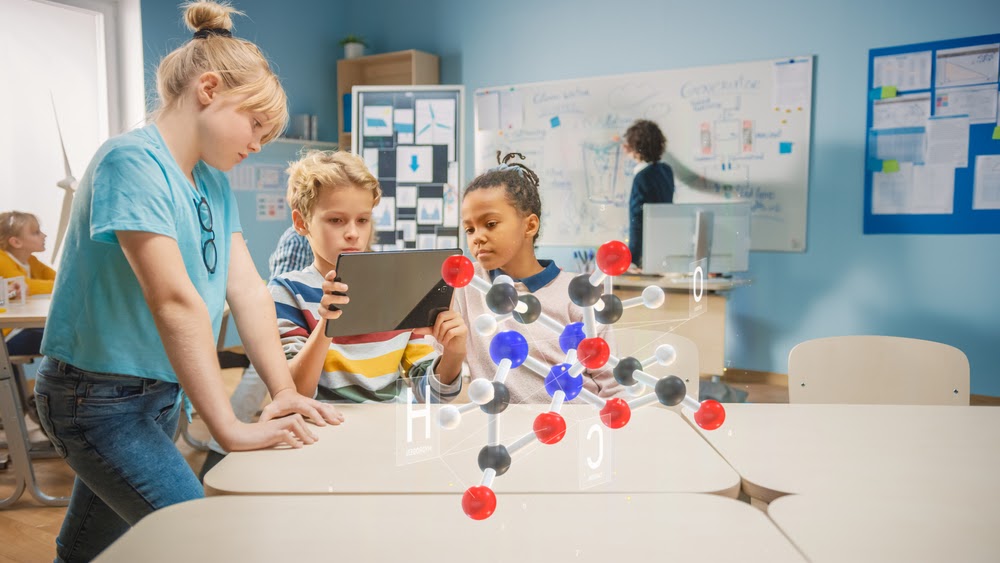 While some teachers have already integrated this tech into their classroom, those who are new to augmented reality might choose to check out these apps and use them to add a more immersive element to their lesson plans.

Science teachers can use a variety of augmented reality apps to enhance specific units and topics. Augmented reality can help students understand human anatomy, explore outer space and even find data about the flora and fauna in their own backyard.

Use these augmented reality apps for science exploration:

Tilda Swinton and CERN scientists help explain the creation of the universe. Users can fully immerse in the experience thanks to mixed reality. Students can even explode a star! And they can even hold the Earth! The app is free to download, and this can be a unique way for students to better understand the Big Bang and the beginnings of the universe.

However, some schools may have different opinions regarding the instruction about the beginnings of the Earth and universe, and this app might not appeal to all districts or schools.

Seek lets students find out all about the plants, animals and insects that live in their backyard or even outside their school. Seek isn’t augmented reality in that the elements can be dropped into the real space.

Instead, students use the camera function on their phone to discover their surroundings. Use the camera to highlight a specific plant or bug. Hold the camera on the object, and Seek will begin the identification process.

Data about the plant, animal or insect will then appear over the captured image. This app can help students learn more about native plants and species in their area. In addition, Seek also includes different challenges, and these can let students (or users) score different badges.

Teachers can use the app to encourage students to find different species or to simply explore their surroundings.

Use the power of augmented reality to conduct physics experiments. This app allows the phone to become a science lab. No materials are needed, and teachers also won’t have to deal with any cleanup. Safety also isn’t a concern, because the experiments are all virtual (or augmented!). Students can build their own circuits or even create their own universe.

The app is designed for users ages four and up!

Explore the solar system with SkyView Lite. Using the camera from the phone, users can identify the constellations in the sky and get more information about the universe. The constellations can even appear in any room or environment, too! Enable location data to get the most details from the app.

The app can be used to help explore the solar system or to help students visualize constellations and other celestial bodies. SkyView doesn’t require a clear sky, and, again, the sky data for every region can appear in any environment.

The BBC lets users explore different historic sites via augmented reality. Get up close with sculptures and different artifacts. Users can even look inside an Egyptian sarcophagus and explore artwork.

For Language Arts, Check out Bookful!

Even books can come to life thanks to augmented reality! Bookful: Kids’ Books and Games includes books with augmented reality features that allow children to enjoy the immersive excitement of the story. The app even features an augmented Elmo! Kids can explore all the characters and stories!

While Bookful is free to download, the app does feature in-app purchases.

Luke AR allows anatomy lessons to go anywhere. Drop in a life-size skeleton and learn all about the different body systems. Luke AR lets the user choose the different systems to view. Study anatomy from anywhere. The app is appropriate for ages 12 and up.

The app uses Gray’s Anatomy and it features an augmented reality mode. There are more than 1,500 videos, and Complete Anatomy even includes a dissection course. The app is free and for ages 12 and up; there are in-app purchase options included in the app.

Dissect a cadaver in augmented reality. With this app, students can examine seven layers of the head and thorax. Download it for free!

Is Augmented Reality the Future of Virtual Learning?

There could be many augmented reality apps that teachers can use to enhance the classroom experience and to help students immerse into instruction. Could these apps become even more prominent in the future? Is augmented reality the future of learning?

Augmented reality apps include experiences that can help automotive students learn more about repairs, they can help medical students identify anatomy and they can even let students (or anyone!) explore the universe. These apps can be downloaded via phones and other devices.

But tech giants may have another device available that could possibly—one day!—be incorporated into the classroom: augmented reality glasses! There currently is not a mainstream consumer-oriented augmented reality model of glasses. Yet, many companies are working on this technology.

These wearables could open up the possibility of other augmented reality experiences, especially for classroom learning. While virtual reality goggles are bulky and expensive, augmented reality glasses could be a more affordable option.

But no one knows what features these glasses would include. For now, the future of augmented reality glasses is mere speculation. Yet, years ago, we likely didn’t think that students would have one-to-one computing options.

Now many students have their own laptop or Chromebook that they use for all their assignments. The idea of every student having a computer was once beyond comprehension because of the cost. As computers have become cheaper, now they are ubiquitous in learning. They are as commonplace as the textbook.

Maybe one day, students will wear augmented reality glasses and experience different lessons in an immersive environment. What if they see the solar system appear before their eyes. Or are able to take an augmented reality tour of the Great Pyramids of Giza.

Who knows what tech company will launch the consumer augmented reality glasses or what they will look like. We could only speculate what features these glasses will include. Maybe they can download augmented reality apps, but maybe not.

In the meantime, though, phones and tablets allow students and teachers to download and enjoy numerous augmented reality experiences that can enhance lessons…and fuel curiosity. Even if teachers don’t integrate these apps into the curriculum, students can still enhance their learning by exploring these unique apps.

As technology constantly upgrades, so, too, will the app experience. Google Play and Apple’s App Store may add more augmented reality apps in the future, and students and teachers can keep their eyes open for new experiences.

Teachers also can look into any app offered by educational sites or companies. Some textbooks might offer apps that feature augmented reality, too! Explore and immerse yourself for a fully interactive learning experience!