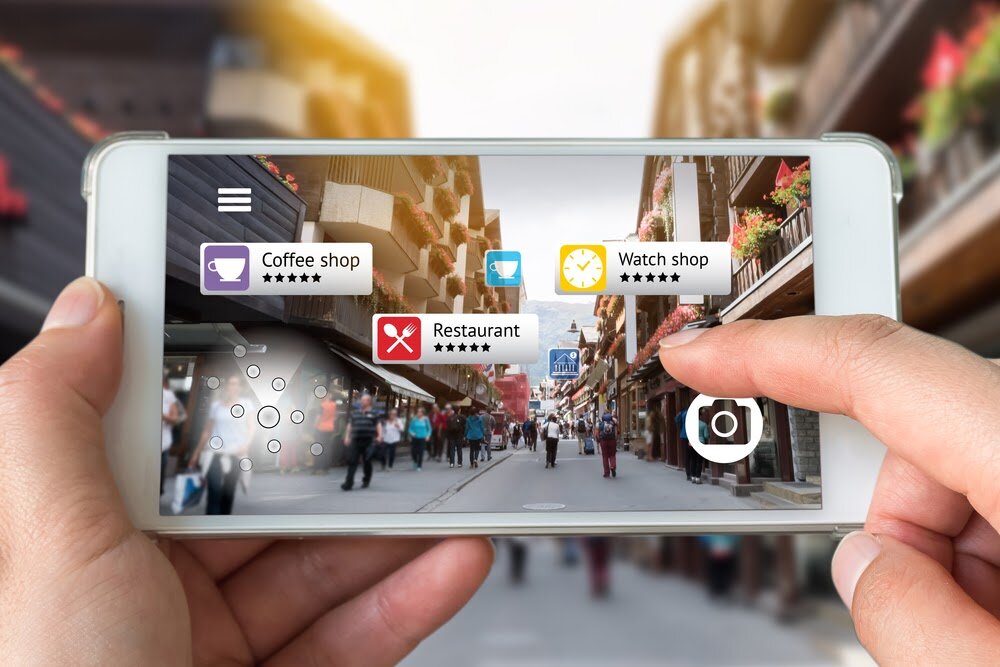 Augmented reality is quickly becoming a “daily use” technology, especially as more comfortable and wearable devices hit the market. Affordable glasses or contact lenses could make what is now a novelty tech become as common as the smartphone.

Just because it is still in the developing phase, doesn’t make this tech any less interesting to marketing firms. There has already been a significant increase in the use of augmented reality in games and the workplace. This market is an expanding one, and that makes it important for companies to include in their marketing.

Right now, it has the ‘cool’ factor of being a fun and novelty technology that can create some impressive visuals and interactions.

As technology develops, it is possible that conversion rates could reduce. For those already experienced in augmented reality marketing, this will mean needing to develop more unique ways of adapting this tech to attention-grabbing marketing campaigns.

So, let’s take a look at some examples of how this can be done.

For some time, weather forecasters have used the green screen to try and add some interesting elements to their forecasts. However, mostly these have remained fairly dull.

Augmented reality through a system called Max Reality makes the forecast far more interesting. It also adds an element of freedom, meaning that the reporter doesn’t need to be in a studio and can instead be at a different location for each report.

It can add augmented reality elements, including clouds, 3D looking displays, or even instantaneously surround the presenter with flood water to give a clear view of how high water levels will be.

Companies are using augmented reality to show potential buyers exactly how things would look in their homes before they buy. In most cases, this is achieved via an augmented reality app. The app allows the customers to see their home via the camera, with augmented changes as they are selected.

In this case, they could put a lamp on the dining room table, or a sofa in the corner to see how it would look. It is even possible to test out paint or wallpaper colors before making any ‘real’ changes.

This kind of app is fun but also fantastic at increasing conversion rates. This is because doubts are removed, or decisions made clearer, once the customer is able to see what the result will look like before they invest any time or money.

People generally enjoy looking good. It is a driving force behind fashion and cosmetics. There literally couldn’t be a better way to convince someone to buy, than showing them how good they could look.

With makeup and clothes, this is done through special photography apps or smart mirrors. Systems such as Modiface convince users by not only showing how they could look but also by adding additional information. They combine AI for “3D facial micro-feature tracking tracks movements and expressions through 68 non-identifying parameters” and augmented reality to show how new hair colors, makeup, etc. will look in real-time.

Clothing companies are also doing similar, with smart mirrors that allow customers to instantly try on numerous styles and without ever needing to change clothes. It is convenience that sells! And, with the latest mixed reality technologies, the systems could even accurately measure clothing sizes.

Clothes and makeup are not the only fashion segments utilizing augmented reality in their marketing. Shoe and sneaker sales is a massive industry. It is also one that is fairly easy (compare to some) to market via augmented reality,

Timberland provides its buyers with the simplicity of a virtual fitting room, allowing customers to ‘try on’ many styles instantly. Of course, as they produce a lot more than only shoes, this is a magic mirror style technology, but that can also be used from a phone or tablet.

Footlocker, on the other hand, has brought their in-store marketing to life with augmented effects via a Snapchat AR advertisement. It is almost like you are seeing the stars of sports in the same room.

Visiting famous places is always on people’s bucket lists. While in some cases it’s a dream that will never come true, others just need the extra push to be persuaded to convert their dollars into experiences.

Virtual tours are available for all sorts of major attractions, from football stadiums to the most ancient temples. However, these virtual tours often help to increase the desire to visit, leading to more sales. Of course, for those that could never afford the trip, they are also an amazing way to experience places that could otherwise remain forever unseen.

Although virtual reality and augmented reality has been used throughout the automobile sector for a while, it is only recently that the front end of sales is starting to strongly adopt this technology.

From virtual showrooms to augmented reality apps that put the car in front of your house, the possibilities are almost endless. In many dealerships, the option to view cars virtually is a nice added feature, especially for vehicles that are not in stock or currently on a waiting list.

Augmented reality can also help sales staff to upsell easily, as it allows clients to see exactly what the added trim levels or features look like. Overlaid information assists further, by highlighting the key features, even allowing for examples of workings or exploded views of complicated areas (such as the engine).

This is certainly not a new thing for theatres to be using, as AMC started with interactive posters quite some time ago. Their app not only allowed posters to suddenly deliver previews but also for customers to buy or ‘pre-request’ tickets to the movies that impressed them.

Today, the ways that companies are marketing movies with augmented reality is inventive and interesting. From the Justice League Facebook effects to Jumanji experiences via Snapchat, the cinematic experiences are not only becoming more realistic, but more in-depth with added content and features.

Why is Augmented Reality Marketing So Effective?

It works so well for marketing because it is both simplistic and ‘real’. Instead of needing to understand lots of technical things, or use controllers, etc., virtual reality simply changes what we see in the real world and grabs our attention by doing so.

Mixed reality is also making augmented reality advertising both more interactive and accurate. Objects can appear as the size they would be in that actual environment, and they can interact through touch, motion, or even with other real objects in that scene.

It allows customers to try, test, or experience the products they are interested in, without needing to commit to the purchase. As customers can test out things fully before committing, they are also more likely to be satisfied with whatever they do decide to buy later.

For those without time, or unable to travel as easily, augmented reality also provides convenience. It can often be used on mobile phone devices or special headsets. As most people have a smartphone nowadays, this allows for augmented reality experiences from anywhere and by anyone with a phone.

This technology also adds information to otherwise simple or uninteresting scenarios. Business cards and posters can pop with animations or information jumping out of them, and even showroom tours can have car information overlaid on the real world car viewing experience. It truly helps create an informed buyer!

When done in the right way, augmented reality is a great tool for marketing. It is useful for showing off a product, giving a sample experience of a place, or even to test driving a car.

It also has good potential for the campaign to go viral. When done in a clever way, such as the advert for Shadowhunters above, it surprises people and makes them laugh. It truly can take your marketing audience out of their automated comfort zones and sit up to pay attention to what your campaign has to say.