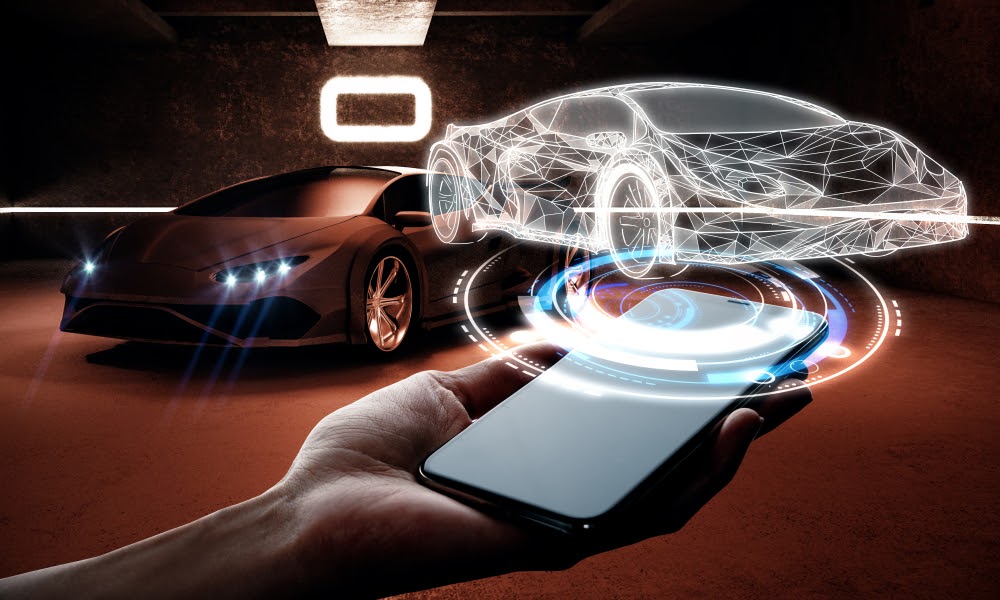 Imagine never having to go into an automobile dealership. Instead, shoppers can choose to view a car in 3D in their bedroom. Or out in the backyard. Using just a phone or a tablet, the car appears before the user’s eyes. Walk around the vehicle. Look inside.

What is an Augmented Reality Showroom?

Augmented reality showrooms aren’t just for automobiles. There are numerous examples of these unique experiences, and they can enhance the user experience by helping to simplify shopping decisions. So how do they work?

Augmented reality combines the real world environment with overlays of graphics. An example of this would be a GPS system in a car that shows the street view but places graphic arrows to show drivers where to turn. Augmented reality is different from virtual reality and it doesn’t necessarily require any special glasses or headsets to experience.

With augmented reality showrooms or try-on experiences, users can preview products like makeup, paint colors, glasses or even vehicles! With ‘try on’ experiences for products like makeup, users will have to allow an app or website access to their device camera (this can be on a phone or a tablet). The photo or image of the individual is then projected with the graphic depiction of the makeup or product of their choice. So lipstick colors will magically appear on the lips, hair color on the hair, etc.

Warby-Parker even created an augmented reality experience for shoppers to try on their frames so they can find the best shape for their face. Augmented reality is a great way to try a product before purchase, and for stores it might also help to lessen returns!

While many companies offer ‘try-on’ experiences via augmented reality, some of these experiences could aptly be considered showrooms. When shoppers think about showrooms, they really think of a big open space in the store with all the products featured. But with technology, users and shoppers need to broaden their view of this definition.

During the pandemic, most shoppers had to hunt for products online from home. They couldn’t visit store showrooms. Maybe the home, the bedroom, the backyard had to be the showroom. Apps or experiences that allow users to drop furniture or even a car into a room can transform the home and the user’s space into a showroom.

Technology has really transformed the shopping experience, but how does this digital transformation impact consumers?

Augmented Reality Showroom Apps and Experiences: The Power is In the Hands of the Consumer

Harvard Business Review’s article focused on how augmented reality made an impact on shopping during Covid. However, the convenience of augmented reality and the power it gives the consumer also might drive its popularity.

Augmented reality showrooms allow customers to take their time and try out different products. In the case of Ulta’s GLAMlab, shoppers can try on a vast array of products. GLAMlab is accessible via the Ulta app. Users can then use their device camera to show their image (think of the camera like a mirror) and then select from different products. The lipstick options are seemingly endless, and users could easily spend an hour trying on different combos of products. The user’s image from the camera can display false eyelashes, lipstick, blush, eyeliner and probably more products at once!

Other stores offer the same type of experience, though. Stores like Ikea let users drop furniture into a room. Sherwin-Williams lets users try different paint hues. Users could literally try out an endless amount of paint hues on their walls just for fun!

For consumers, while these experiences can be entertaining (especially when everyone is stuck inside), they also are incredibly helpful. Before augmented reality showroom apps and experiences, shoppers had to guess what product would flatter them…or look good in a room. Now, some clothing companies even offer virtual try-on experiences so shoppers can preview different looks!

Who Wants to Preview a Car in the Living Room?

Augmented reality showroom apps or experiences can even include vehicles. Different manufacturers have created augmented reality experiences that let users drop a specific vehicle model into any space. But why would a consumer want to see a car in their home? Or on the bed?

Augmented reality automobiles are replica models of the real vehicle. So these digital models can give consumers more details about the car than a two-dimensional photo. Using the camera on the phone (or tablet), the user shows the space where they would like the car to appear. Then the car appears before their eyes. However, this isn’t just a fun graphic. The user can walk around the car or maybe even look inside.

Augmented reality gives consumers a bit more freedom to preview cars at their own leisure. And from anywhere. Plus, the augmented reality experience is fun! Seeing the car appear and then exploring a 3D model just seems almost surreal…and, well, a bit futuristic.

The Future is Today…and Beyond

Do Consumers Need to Invest in Augmented Reality?

While Facebook announced a partnership for new glasses with Ray-Ban, these glasses are not going to include augmented reality. What they will feature is still up in the air, though. While a teaser video was released, no one knows what the glasses will look like or anything about their capabilities. Maybe there will be color choices? Maybe they will look like Wayfarers? Really, the details are a big question mark!

Maybe augmented reality is side-swiped by virtual reality. Perhaps virtual reality showrooms become another type of option for consumers. Could we all have an avatar that features our exact measurements and serves as our personal virtual model for clothes, makeup and more?