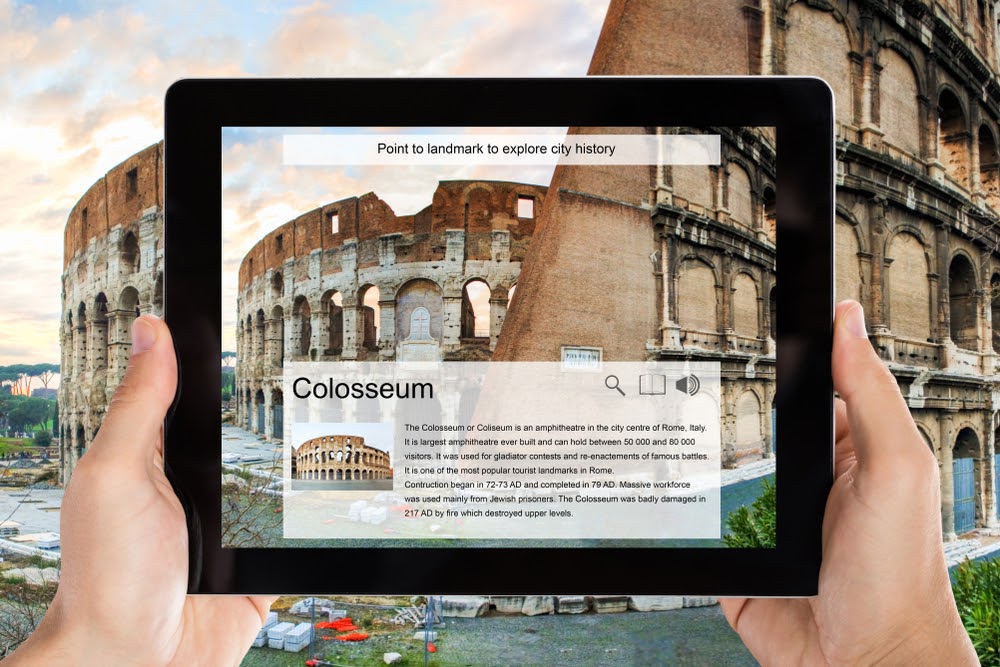 Augmented reality experiences are used by companies and businesses to improve the user experience for online shopping or to create unique and immersive marketing campaigns that introduce consumers to a new product. These experiences can be used to help consumers virtually try-on products, view products in their home or even check out a new car.

Sometimes parents might stumble across cool apps because their kids use them for school. Augmented reality apps can help students–and anyone with a curiosity about their surroundings–to explore the world, dig deeper and learn more.

These augmented reality apps use the camera to point at the sky, the ground, the trees and even little crawly bugs to uncover more beyond the two-dimensional photo. Check out these apps and experiences to explore nature, celestial bodies, and even the other side of the world.

Google’s Floom can only be used by those with an Android device. But this cool experience lets users dig a hole or whirl a portal to the other side of the world. What makes Floom so cool, though, is that the user actually digs the hole or the portal in their environment. Users then can see the other side of the Earth and explore their surroundings on the flip side. Floom lets users angle their portal or hole so they can explore different destinations from the same original place.

Download SkyView Lite for free via Google Play or the App Store. The app lets users point their device camera at the sky to find constellations and other bodies in the night sky. Graphics will appear over the user’s view of the sky with information about the patterns of stars. While the main app is free, upgrades provide access to more features…but the upgrade is an extra cost. Gearbrain reviewed the app and explained that it also can display coordinates and other information. The site also explains that the app can be used during the day…and users don’t necessarily have to point the camera at the sky. Users can actually use the app anywhere to see the night sky. The app will ask the user’s permission to access location and other data. Of course, this app is probably more fun to use outside looking up at the night sky…but, again, anyone could use it from any location (even in a bedroom!).

Not sure what plant lurks beneath your feet, use Seek to find the answer. What about that unique looking bird perched in a tree? Seek can identify both the bird and the type of tree. This app can be addicting for those who love to go out in nature and explore their surroundings. Seek is easy to use, too. A smartphone or tablet camera captures whatever it is the user wishes to identify. The user will need to hold the image on the screen as the app thinks. Then data will begin to appear that identifies the image. Users can find out the species and data of almost any living thing. Some insects, though, might be too tiny to identify. Students also can take challenges via the app!

Who needs the zoo for visiting animals? Use Animal Safari AR and the animals can appear anywhere. The app is free and takes users on a virtual safari. See a penguin, a zebra, a tiger, an elephant and more. Animal Safari also displays information about each animal. Users also can walk around any animal, feed them (virtually, of course) and hear the noises each one makes. Plus other cool features, too! While this app is available via the App Store, Google Play offers the app Safari Friends – AR Animal.

This app is meant to be used within the Smithsonian Museum to put a visual depiction over the bones of animals displayed in the museum’s Bone Hall. However, the app also can be used with printouts of the exhibits…so individuals at home can use the app, too. With this app, users can actually see animals in action or what they looked like…plus other activities, too!

Not in the mood to learn something new? Sometimes it’s fun to just use an app that’s random…and weird. But fun. These apps aren’t really games. They are not necessarily instructional. However, they are fun nevertheless. One even helps find your car while another catches the Tooth Fairy!

The app lets the user choose spiders that appear in their space…and, yes, users can interact with the spider. They can also record their interaction to mess with their friends or family. Arachnophobes beware!

This app lets users select any image to use as a sort of design map to trace the picture on paper. Draw anything in your surroundings. Or choose from images via the app. Tracing Projector also lets users record their drawing experience. Become an artist! While this app is available via the App Store, Google Play offers an app called Trace Anything…which is similar.

This app lets users record and create their own UFO video. No, those flying objects via the app aren’t real! But maybe friends think those UFOs are the real deal!

The app for users that are prone to not remembering where they parked. Yes, this app is both fun and useful. The app instructs users to save their location…and the app will help find the car when the user is lost. Plus, users can set alarms via the app so they don’t run out of time on a parking meter!

Looking for more fun? Augmented reality integrates into many games for an immersive playing experience. While many gamers probably have already played well-known games like Pokemon GO, Harry Potter: Wizards Unite, and Angry Birds AR: Isle of Pigs, there are many more augmented reality games to play via apps.

This game is a bit like a virtual Tamagotchi. Hatch and care for a dragon and drop it into the real-world environment. Users can play catch with their pet and even style their dragon. Users must be sure to feed their pet for optimum health and happiness. The app also notes that all dragons are unique!

Speaking of the old-school Tamagotchi, there is an app for an augmented reality Tamagotchi experience.  Check out My Tamagotchi Forever to care for this classic virtual pet!

This app is for ages 17 and up and lets users play augmented reality pools. Challenge friends or challenge the ‘bot. There are in-app purchases, but the app is free to download.

Should this be categorized under the oddly fun apps? Perhaps. But it’s also a game…and recommended for ages 12 and up. So what’s the object? Destroy everything! Smash objects in augmented reality. The app notes that this game is great for stress release. Had a hard day at the office? Maybe smash up the world in augmented reality…no harm done!

What is DaGame? It’s a racing app. It boasts that it features “epic music” as well as several different characters, “epic sound effects,” and more. The game was rated 4.9 stars from more than 20,000 reviewers! It’s recommended for ages 4 and up.

Engineers will love this game. The app notes in its description that it “…is a complex yet approachable physics-based puzzle game.” Players build bridges at different playing levels. Will the construction hold? Will it be built with the best material?

And There Are More

When looking for augmented reality apps, users are going to have to hunt through an extensive list. Augmented reality has seeped into games, random entertainment apps, store experiences, educational apps and more.

Looking to solve a cube puzzle? There is an augmented reality app that was designed to help. Users also can download fitness apps that incorporate augmented reality. Run from zombies…and get a workout in the process!

Augmented reality features also can project planets into an environment or draw graphics over a photo. Different devices all offer unique augmented reality apps. Want to explore this technology? Do a search and start enjoying the augmented fun!