What is the Best Subaru for Camping? 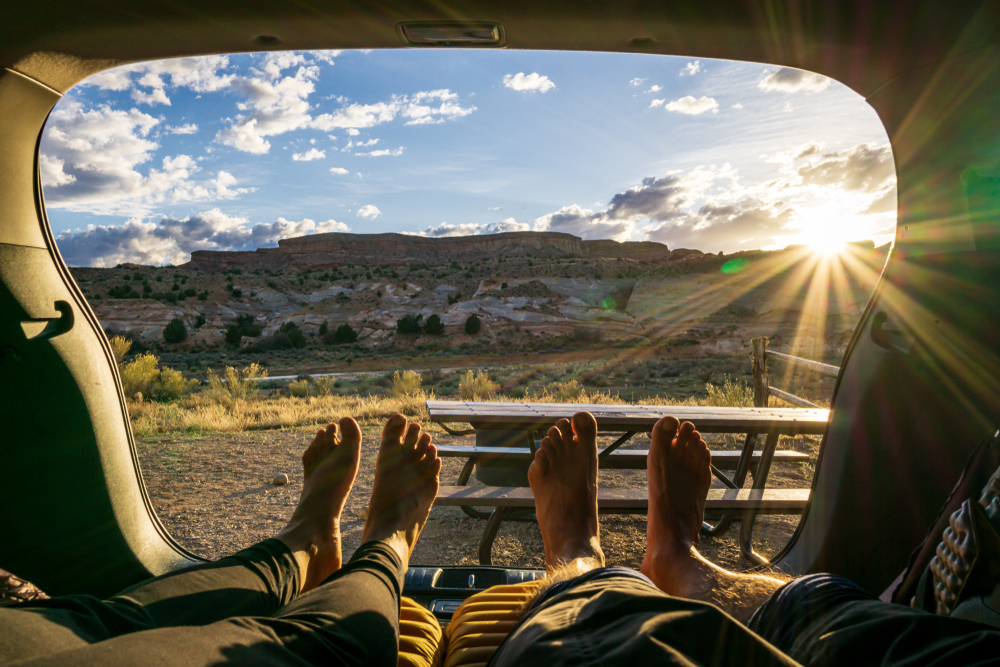 Subaru offers affordable, fuel-efficient vehicles and many models also score high for safety. While affordability, fuel efficiency and safety are the three key factors that might influence a millennial buyer, the choice for a vehicle also can focus on driving habits.

Some buyers need a vehicle for road trip adventures; they might want a car that offers enough cargo space to accommodate a makeshift bed in the back for car camping. Others might need a vehicle that is capable of towing their camper. What is the best Subaru for camping?

Buyers who are loyal to Subaru might know that the brand doesn’t offer an extensive lineup of vehicles. Those who are new to shopping Subaru will discover that beyond the four SUV models, Subaru only offers four other vehicles, which include two sedans (the Impreza and the Legacy) and two sports cars (the BRZ and the WRX).

Subaru doesn’t offer a pickup truck and it also doesn’t produce a minivan. While the brand doesn’t offer any models with a hybrid drivetrain, the 2023 lineup features a new electric SUV model called the Solterra. The Solterra will have a starting MSRP of $44,995. The two-row SUV offers space for five and will have an estimated range of 228 miles.

Could the new electric model be conducive for car camping? Car and Driver reports that the Solterra provides 30 cubic feet of cargo space (when the rear seats are dropped down). While it could be spacious enough for two people to sleep in the back, the sleeping space might be snug. There are no available specs related to towing (as of yet).

About the Best Subaru Models for Camping

Those who are interested in an electric SUV could opt to purchase a new Solterra, but those who are fine with trips to the pump have several SUV options from Subaru’s lineup.

The Subaru Crosstrek is a crossover. It has two rows of seats and space for five. The compact Crosstrek also is affordable, with a starting MSRP of $23,645. For those who want to use the Crosstrek for camping, the model offers 20.8 cubic feet of cargo space behind the second row (for gear and luggage).

With the second row folded, the Crosstrek can include up to 55.3 cubic feet of cargo space. For taller individuals, sleeping in the back might mean that stretching out isn’t really an option. The Crosstrek also has a limited towing capacity of 1,500 pounds.

However, those who need to pack a tent and their gear will have plenty of space in the Crosstrek. In addition, the model offers decent fuel efficiency for longer road trips—it can get 33 MPG on the highway and 28 MPG in the city.

The Forester is a compact SUV that features two rows of seating and space for five. It starts at $25,895. The Forester offers more cargo space than the Crosstrek, which means it could be a better option for those interested in using their SUV for car camping. The model offers 28.9 cubic feet of cargo space behind the second row, but this expands to 74.2 cubic feet when the second row is folded.

The 2022 Forester received a Top Safety Pick+ rating/award from the IIHS.

The 2023 Outback starts at $28,395; it offers two rows of seating and space for five. It’s larger than the Crosstrek and the Forester and would be a good option for those who want to camp in their car. The Outback offers 32.6 cubic feet of cargo space behind the second row (plenty of space for gear and a tent). When the second row is folded, the space expands to 75.6 cubic feet.

The Outback also offers more towing power. It can pull up to 2,700 pounds and can get up to 26 MPG in the city and 32 MPG on the highway. The 2022 Subaru Outback received a Top Safety Pick+ rating/award from the IIHS.

The Ascent is Subaru’s largest SUV model and offers three rows of seating and space for up to eight. The Ascent has a starting MSRP of $32,795.

With three rows of space, the back cargo area offers 43.5 cubic feet of space for gear and other necessities. With both rows dropped down, the cargo area expands to 75.6 cubic feet. However, this is the same amount of space offered by the Crosstrek (when the second row is folded.

The Ascent might offer the same cargo space as the Crosstrek, but it does provide more towing power. For those that need to tow a camper or a boat, the Ascent offers a towing capacity of 2,000 to 5,000 pounds (depending on the trim). The Ascent can get 21 MPG in the city and 27 MPG on the highway.

The 2022 Subaru Ascent received a Top Safety Pick+ rating/award from the IIHS.

Are Subaru’s Sedans Good for Camping?

Subaru offers four other models in its lineup. Two of those are sports or performance cars, and the Impreza and Legacy are sedans.

The 2022 Impreza starts at $19,295, which makes it an affordable option for those who might have a smaller car budget. The Impreza offers decent fuel efficiency, too—28 MPG in the city and 36 MPG on the highway.

While the standard Impreza doesn’t offer towing power or much space for sleeping, for those who want to camp in their car, the Impreza also is offered in a five-door model. This particular trim provides 55.3 cubic feet of space if the back seats are folded.

Since the Impreza offers good fuel efficiency, it could still be a great choice for road trips and should offer enough space for packing a tent and additional gear. Even with the larger trim, the back seat could be a bit cramped for car camping (although car owners could try it out).

The Subaru Legacy is the brand’s other sedan, and it’s larger than the Impreza. The Legacy has a starting MSRP of $23,495.Like the Impreza, the Legacy also gets decent fuel efficiency—27 MPG in the city and 34 MPG on the highway.  However, the Legacy only offers 15.1 cubic feet of trunk space. The Legacy received a Top Safety Pick+ rating/award from the IIHS.

Buyers might find that both the Impreza and the Legacy offer good fuel efficiency for road trips, but car camping in these models might be snug; the Legacy doesn’t really offer back seat space for those who want to sleep in their car.

The Best Subaru for Camping

Buyers have four choices of Subaru SUVs/crossovers that could be used for camping. Several of the models provide limited towing capacity, though.

The back seat space of the Forester, Outback and Ascent could offer enough room for sleeping. These might be the best models for car camping.

However, all the models from Subaru are great options for stowing tents and other gear. Subaru’s models offer decent fuel efficiency and all the models might be affordable for longer road trips. While the brand’s sedans don’t offer extensive back seat space, they, again, provide enough cargo space for camping equipment.

Buyers on a budget also could look for older Subaru models. Subaru’s past lineup once included pickup trucks. Buyers might be able to find a 2006 Subaru Baja pickup truck (or an older Baja) when shopping used/pre-owned models; pickups offer an open bed that provides plenty of cargo space for all types of gear.

Since the Baja was produced more than 15 years old, buyers might only find vehicles with higher mileage.

Subaru also made a van that looked similar to Volkswagen’s microbus. The Subaru van was called the 360, and it’s not the easiest model to procure. The 360 also doesn’t offer much speed, although it would be an interesting option for campers.

Car buyers might have their own checklist as to what makes the ideal camping vehicle. Some buyers might need towing power to pull a camper (or maybe a boat). Others prefer to camp in their car and need cargo room for creating a back seat bed.

Some campers just want a car that offers enough trunk or cargo space for packing up their tent and gear. They might focus on fuel efficiency to ensure that their road trips don’t break the bank in trips to the pump.

Subaru offers several SUVs that are fuel-efficient, budget friendly and safe; buyers can research these models to find the best one for their camping adventures.