Cars with 3 Front Seats Include These Models 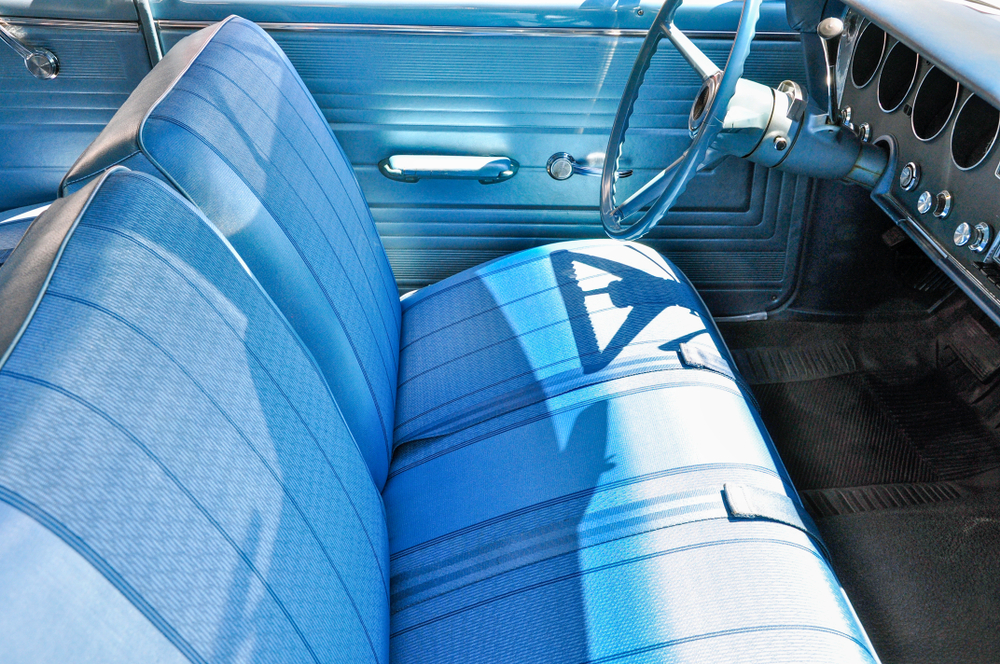 Cars with three front seats used to be fairly common; some might remember three seats in a station wagon or even in an older Chevrolet Malibu, Chevrolet Chevelle and other ‘70s and 80s models. However, as car designs became sleeker, seat space in the front favored room for only two—the driver and one passenger. Are there still cars with 3 front seats?

Today, cars with 3 front seats include popular pickup truck models and a few larger SUVs. These pickups and SUV models include a bench seat in the front that can fit up to three people:

Why Choose a Vehicle with Three Seats in the Front?

A bench seat is a term for a seat that offers room for three people. Instead of two separated seats, the bench seat is designed like a bench or a couch. Car buyers might be focused on the front-seat bench because it simply offers more room.

Bench seats in a pickup truck also provide more space for the driver and the front seat passenger. The elongated seat also might allow for extra gear to be stored in the front, too.

Older car owners might remember that these spacious front seats used to be the norm, though. What happened to the bench seat in the front? Why don’t more manufacturers offer them?

CNBC explained that styles have changed and so have safety rules and recommendations. The site noted, though, that electric cars could start incorporating this older seat style.

Three Seats in the Front are a Blast from the Past

In the ‘70s and ‘80s, it wasn’t uncommon for children to ride in the front seat of a car. It also wasn’t uncommon to see children or grown adults riding in the bed of pickup trucks. The understanding of automotive safety has obviously changed dramatically through the years; most parents today wouldn’t think about letting their child ride in the bed of the pickup or in the front seat.

The recommendation for enjoying the front seat is now relegated to teens and older.  Children under the age of 13 should stick to the back seat. This is due to the fact that front-seat air bags are designed for adults not children; if children are sitting in the front seat and are in an accident, they could face worse injuries.

The understanding that children simply aren’t safe in the front seat might have led to the transition to a two-person front seat. Most adults aren’t going to squish together up front, which makes three-person front seats impractical.

As CNBC noted, style and preferences also have changed. Those older bench seats in the front now look dated compared to the standard seats we now associate with the front space.

The Electric Car and the Bench Seat

CNBC’s article also noted that the electric driving trend could propel us back to the past as it relates to front seat space. An article from Reuters confirmed this; the news site reported that at the 2019 Shanghai Auto Show, concept vehicles from Audi and Infiniti featured bench seats that “…point to a future of living-room-like comfort in cars….”

The bench seats are noted to allow passengers to stretch out comfortably. Thus, the interior renovation is less about fitting more passengers and perhaps more about creating a luxe drive.

Do any current electric models feature three seats in the front? The Drive reported that the new Volkswagen ID.Buzz (the electric bus) would feature a front bench seat. The Buzz is a newer take on the iconic and beloved Minibus from the 60s and 70s; however, the new Buzz is designed more like a van than a bus.

Unless car buyers are interested in purchasing a larger SUV or a pickup truck, their desire for a new car with a bench seat will need to be benched. Shopping used models, though, could open up lots of options for vehicles with bench seats.

The front bench seat was popular in the ‘70s and ‘80s; models from this era might feature that cozy elongated front seat. However, buyers need to be cautious when shopping for older vehicles.

Cars built in the ‘70s and ‘80s didn’t offer the safety systems that today’s cars integrate. The back seats didn’t even offer shoulder restraint seat belts; instead, children only had lap belts that secured near their waist.

In addition, these older cars also won’t offer the latch systems necessary to fasten modern car seats. While older vehicles might offer more space in the front, buyers with a family might face issues related to car safety.

Those who are only shopping for their own driving needs, though, could be drawn to an older model for nostalgia or other reasons. When shopping for a used model, the age of the vehicle impacts the price. In addition, make/model, mileage and condition also could cause the price to rise or decrease.

What are the best older vehicles that feature a front bench seat? The best options might simply be the models that are available in an area. Cars from the ‘80s and ‘70s—especially iconic models—might be difficult to find when shopping. Some also might be collectible. If buyers find an older option, it also might require work to make street-legal.

Older models from the ‘70s or ‘80s could be incredibly affordable, though. Depending on the condition and other factors, the purchase price might be negligible compared to the price of a new model. However, buyers also could need to build in any rehab costs to repair or upgrade features of the vehicle.

In addition, cars that are from the ‘80s or earlier also could cost more in fuel. The efficiency of models has improved through the years. According to stats about the 1983 Chevrolet Malibu, this earlier iteration of the model offered about 20 MPG. However, the most modern model offers 29 MPG in the city and 36 MPG on the highway.

General Motors offers several SUVs that provide a bench seat in the front. Buyers can choose from the following SUVs:

Buyers looking for a three-person front bench seat might have limited options in the modern market. However, GM still offers SUVS with a roomier front seat.

Not all trims allow for the front seat to include space for three. Buyers will need to explore their trim options if they desire the front bench. The Tahoe starts at $52,000 and can tow up to 7,600 to 7,900 pounds. However, it only gets 14 MPG in the city and 20 MPG on the highway.

The Suburban starts at $54,700. It is one of the roomiest SUVs on the market for cargo space; it offers up to 144.7 cubic feet behind the front seats. The LS trim is the only trim that can fit up to nine people. Like the Tahoe, it gets 14 MPG in the city and 20 MPG on the highway.

How Can Buyers Understand the Size of the Front Seat?

Trying to find the best pickup or SUV might be a tough decision for buyers. When shopping for a new (or used) vehicle, buyers should understand their budget so they know how much they can feasibly spend. Once the budget is set, they can explore their car options using RelayCars.

Car shoppers can download the RelayCars app to explore vehicles via 3D interactive imagery or in virtual reality. Those who want to use the virtual reality experience, however, will need access to a Google Cardboard headset. The app is free to download on both Google Play and the App Store.

Interactive images utilized by RelayCars let buyers explore the car inside and out. Turn the car around to see all the design features. Interior panorama photos let buyers look inside the car and see details like the infotainment screen or even look up at a sunroof.

RelayCars also offers details related to vehicle specs and pricing for every make/model in its online inventory. Car shoppers can use RelayCars for all their research; find out if the price is right, check out cargo space and explore the vehicles using the interactive 3D models. RelayCars makes it simple to find the best vehicle for every buyer.