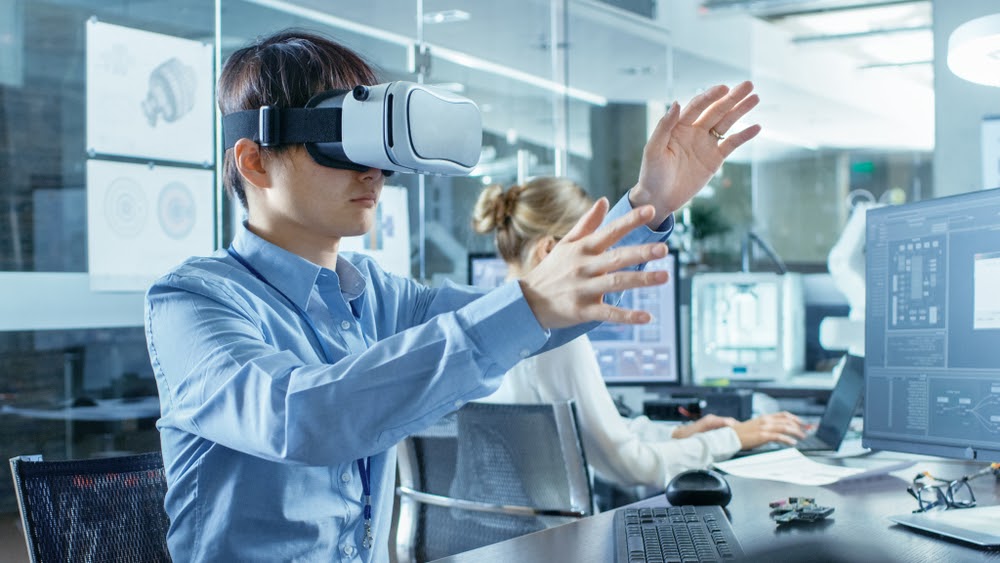 Back in March, Wired marked the five-year anniversary of the Oculus Rift headset with an in-depth article focused on Facebook’s virtual journey. The social media giant is a major player in the extended reality industry, but Google, Microsoft, Snap and Apple all have their own unique augmented and virtual experiences and product offerings.

What is Virtual Reality Labs?

The Verge cited a study that noted that about one fifth of Facebook’s employee base is focused on virtual reality. Per The Verge, about 10,000 employees are part of Virtual Reality Labs.

Facebook’s research labs focused on all things extended reality. While Facebook has created one of the most affordable virtual reality headsets on the market, the company’s team of developers is obviously not simply sitting around content with stopping with Oculus.

So what, exactly, is Facebook creating in Virtual Reality Labs? Exact projects might be known to only employees, but, according to Facebook, “…We are developing all the technologies needed to enable breakthrough AR glasses and VR headsets, including optics and displays, computer vision, audio, graphics, brain-computer interface, haptic interaction, eye/hand/face/body tracking, perception science, and true telepresence. Some of those will advance much faster than others, but they all need to happen to enable AR and VR that are so compelling that they become an integral part of our lives, and we are making all of them happen.”

Facebook’s Virtual Reality Labs also offers a comprehensive news section with articles and updates about current research. Check out some of the augmented and virtual reality experiences that could transform technology in the future. Keep in mind that all these potential experiences are just research…they are not hitting the market!

Could augmented reality integrate into a hearing aid? This could be a possibility in the future. The journal Ear and Hearing published an article from researchers at Facebook Reality Labs Research.

While augmented reality advancements and connectivity with hearing aids isn’t currently a reality, the potential for this technology could provide greater support for those with hearing impairment.

Could those bulky heavy headsets disappear in the future? While Oculus isn’t going anywhere anytime soon, Facebook is looking at other ways to make the virtual reality experience sleeker.

One of the Virtual Labs’ news stories focuses on lightweight virtual reality glasses that use holographic optics. The prototype that is shown looks like sunglasses. The glasses are a huge change from the headset. Facebook notes that it’s currently working on full color graphics for one of the smaller prototypes.

Fitness trackers and smart watches are nothing new, but Facebook is researching how to integrate augmented reality into a wrist-based device. The focus on the wrist was noted as this placement is comfortable and provides easy interaction. So how would the wrist device work? Electromyography deciphers ‘nerve signals’ into commands that then control the device. And the wristband or bracelet would work with augmented reality glasses!

“We believe our wristband wearables may offer a path to ultra-low-friction, always-available input for AR glasses, but they’re not a complete solution on their own — just as the mouse is one piece of the graphical user interface, ”said Hrvoje Benko, research director for Facebook’s Research Labs on Facebook’s tech site “They need to be assisted with intent prediction and user modeling that adapts to you and your particular context in real time.”

The BBC recently reported on a possible Facebook augmented reality smartwatch. But this could be just another tech rumor, and consumers might not want to get too excited.

The BBC quoted an executive for the company who noted that “We’re investing in technologies across the board… research doesn’t always lead to product development.”

The BBC’s story cited a story from The Verge, which noted that the product could launch next summer. The Verge detailed that the watch would have two cameras that can even be detached from the watch.

Could the watch be wearable wrist tech? Until Facebook announces anything official about the possible watch, consumers might just be left speculating…and waiting excitedly for a new launch.

While Virtual Reality Labs is constantly working on new research and looking at ways to advance augmented and virtual reality, Facebook also has new tech offerings that will soon be available to the public. And Facebook’s Spark AR Studio is expanding into augmented reality for video calls!

In a partnership with luxury sunglass manufacturer EssilorLuxottica, sleek chic new smart glasses will soon be available to the public under EssilorLuxottica’s Ray-Ban brand. Unfortunately, there are no firm details about the tech that will be offered via the Facebook x Ray-Ban glasses. However, Facebook did tell The Verge that augmented reality will not be a feature of the eyewear.

Even the design style of the glasses is a bit of a mystery. While a video launched on YouTube teasing the glasses, a photo of the product wasn’t shown. Will the glasses favor Ray-Ban’s popular Wayfarer style? Will there be numerous color choices?

Consumers will simply have to wait for the official launch to find out!

Augmented reality for video calls could be a reality. And Facebook is looking for participants to try out the Beta version of the tech. Unfortunately, those who want to sign up to try out this new experience are limited to “qualified creators and developers.”

Those who are accepted to try out this new Spark tech can explore augmented reality graphics for Facebook Messenger. Facebook explains that the tech will expand to Instagram and Portal as well.

What’s Next for Augmented and Virtual Reality?

Technology constantly and consistently changes and updates for the changing needs of the consumer. Augmented and virtual reality products, however, could be the future.

Facebook and other tech players in the industry are constantly innovating. Facebook’s research could predict the future of what extended reality could deliver to the masses. Hearing aids that could communicate with augmented reality glasses could change the way that those with hearing impairments listen to the world. Augmented reality could provide them with better control and a more comfortable environment.

Wrist-based devices could point to a more advanced smartwatch or other wrist device that is engineered to interact, once again, with augmented reality glasses. The device’s features and capabilities could include electromyography, as Facebook is currently exploring. However, different companies might introduce and create unique wrist-based devices.

However, the future of what tech holds rapidly changes. While speculation could eye a wrist device, the future could include the launch of something entirely and uniquely different. As research continues, some products could prove to be unsuccessful or research findings could take developers and engineers into an entirely new and different direction.

There is always buzz about some new product. Speculation about Apple, Facebook and other tech companies and their possible launches hits the news. Consumers begin to anticipate possible arrivals. However, until companies make their official announcement…speculation is only speculation.

What’s next for Facebook could be augmented reality glasses. Or a wrist device. But, really, only those on the inside of product development know for sure what new gadget awaits the ever-anticipatory public. Until the next big announcement and the next latest greatest device is announced, consumers can look forward to the final unveiling of a product that has been officially announced.

Those craving a new device, a new product may soon be able to wear a new pair of Ray-Bans, courtesy of Facebook. Of course, what consumers can see through those lenses is still a mystery. While no augmented reality experiences will appear to those who wear the glasses, there may be cool features beyond the sleek design of new frames. Will those new Ray-Bans link to Facebook somehow? Or instagram? Will they allow users to dictate posts? We’ll soon find out!