What is the Future of Augmented Reality in the Auto Industry? 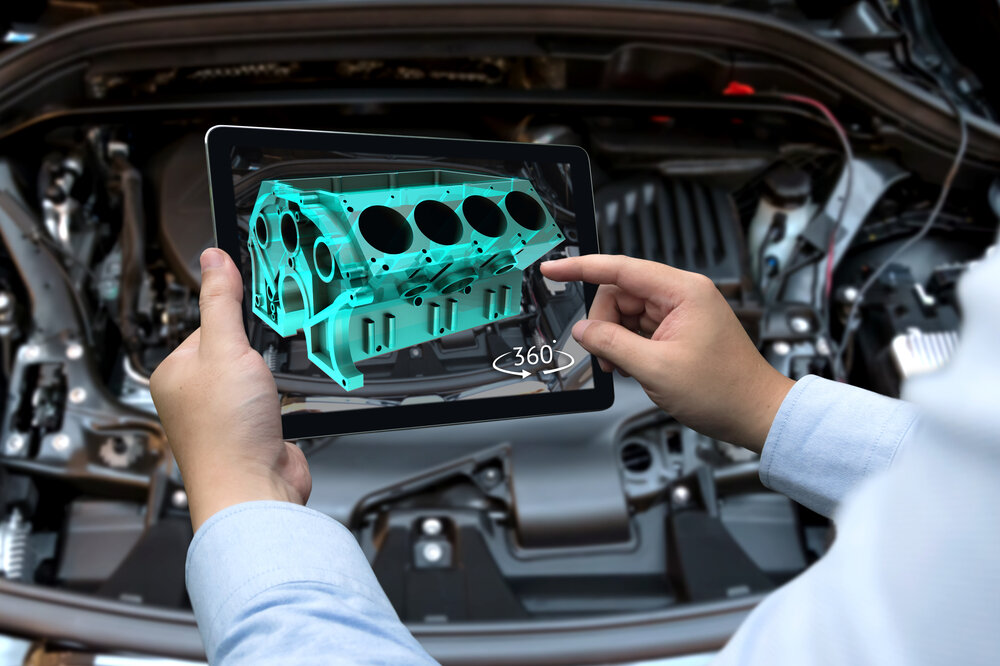 While Tesla has been dominating the headlines when it comes to technological advancement, many mass market brands are integrating augmented reality into the creation, sale, and functionality of their vehicles.

Augmented reality is making it easier, safer, and more enjoyable to go for a drive. Read on to learn how auto manufacturers, dealers, and drivers are utilizing augmented reality in the automobile industry.

From the ideation stage to preliminary testing, car companies are using augmented reality to fine tune new vehicles before they hit the market. This is largely made possible with enhanced imaging software, dynamic projection technology, and improved remote control cabilitties.

Traditionally, vehicles have had to undergo extensive physical trials to ensure that they meet all of the necessary qualifications to move on to the next stage.

Augmented reality allows technicians to test critical functions and capabilities without the need for a physical vehicle. By creating a responsive and realistic virtual environment, testers are able to create real-world scenarios without a physical course or trial vehicle.

Not only does this smooth over critical logistics and technical checkpoints, but designers and manufacturers will collectively have more time and manpower for creative development and innovation. Remote and onsite workers can use AR planning and blueprinting to better allocate production equipment and layout instructions.

Augmented reality can incorporate AI computing to automate repetitive and tedious tasks. This is another feature that can reduce staffing and equipment costs. Improving time management by removing unnecessary steps from the production timeline is especially critical during the ideation phase of the product development process.

Augmented reality also helps corporate planners build an infrastructure that meets all of their production needs. By simulating workspaces that support the necessary material flows and production processes, this method allows automotive brands to make the most out of every dollar spent on operational costs.

Even better, the application of AR gives remote teams the same level of access and hands-on influence as in-office workers. Now, telecommuters can see every step of the production process using hyper-realistic projections, dynamic-response simulations, and seamless interconnectivity with the user’s own mobile devices.

Augmented reality is also becoming a critical component of the sourcing and mass manufacturing process for niche and mainstream automotive brands. Workers throughout the supply chain are improving the way they interact with each unit with enhanced training, quality assurance, and damage control.

Augmented reality makes it possible for technicians to learn about every detail of the car using interactive projections and virtual use scenarios that factor in dynamic elements like movement, speed, and even terrain type.

Rather than physically looking under the hood, it’s possible to use augmented reality programs to assess a virtual render of the car and all of its individual parts.

By improving accuracy and consistency throughout the supply chain, car manufacturers and suppliers can save money on materials, waste, and errors. Augmented reality programs can give technicians the ability to view each and every part of the car on a hyper-granular level. The more each specialist is able to learn about what the exact model they’re working on, the better their production success rate will be in the long run.

Airlines have used AR for years to safely create digital testing scenarios and realistic testing programs. But, did you know auto manufacturers are also using the same technology to improve safety through the manufacturing, testing, and consumer driving process.

Augmented reality technology is already being used by car brands like:

Instead of focusing on the car’s instrument panels or an external device, driver’s can use augmented reality to consume information without taking their eyes off the road.

When it comes to proximity guides and rear-view cameras, augmented reality prepares the user for virtually every driving scenario. AR adds to the realism and provides a higher level of clarity and visibility for the driver with detailed, easy-to-view alerts and boundary guidelines.

Auxiliary benefits, including parking assistance and enhanced blindspot sensors, adds even more protection. If you’re heading out of state or down the street, you can rest assured that you’ll have a strong digital support system during the entire ride.

What if you could have an entire library of music and interactive entertainment options at your fingertips, while you’re behind the wheel? Whether you have a co-pilot or are driving solo, using augmented reality to improve in-vehicle entertainment will make the trip easier and more enjoyable for everyone in the car.

Augmented reality providers use bluetooth, Android, Apple, and Microsoft technology to allow the vehicle to sync with the user’s mobile device. Cloud storage and file sharing capabilities add an extra layer of accessibility and cyber security by allowing all of the car’s digital aspects to communicate seamlessly without any external equipment.

Families with children can take advantage of segmented entertainment options that allow everyone to control their own media. Plus, you don’t have to deal with the stress of arguing over the music (or movies) until a consensus is reached.

Whether you’re planning on taking a 12-hour road trip or you just want to improve your daily commute, augmented reality can provide you with a safe and simplified immersive experience every time you turn your keys.

Experts expect the augmented/virtual reality industries to reach a value of about $673 billion by the year 2025. Within the automotive industry, AR/VR are already established as a market staple for new cars hitting the market.

By reducing the amount of time drivers spend taking their eyes off the road, augmented reality technology is already making vehicles safer for everyone on the road. Additionally, improving testing and reporting metrics as a result of reduced human error and manual production methods is making the manufacturing process cheaper and more efficient.

With more than 1 billion users expected to hit the market this year, augmented reality is quickly gaining traction across many industries. The automotive industry is pioneering this technology in a big way, and more drivers will be taking advantage of this revolutionary tool.

This system is also improving many existing standard automotive fixtures. This has led to the ideation of various smart accessories, like an AR-enhanced rear view mirror that can detect a blind-spot threat and project a video feed of it in the rearview mirror in real time.

Another groundbreaking development is a system of mirror-imbedded cameras that can compile an unobstructed panoramic image of everything that’s behind the vehicle. While back-up cameras give some level of visibility, augmented reality removes more safety and security threats than any other system of imaging technology up to this point.

Future of Augmented Reality in Automotive

Automotive and tech experts predict AR technology to become even more seamless and accessible in the near future. As smart wearables move to replace phones and portable devices, the automotive industry will keep creating interconnected systems to improve the driving experience for everyone on and off the road.

If you’re shopping around for your next vehicle, consider opting for a car with an integrated augmented reality system for improved safety, performance, data security, and entertainment. For dealers and sellers, be sure to highlight any applicable capabilities in regard to AR, VR, and AI to maximize your marketing efforts and attract a wider consumer base.

When it comes to the future of augmented reality in the automobile industry, we’ll be keeping an eye on this dynamic and ever-expanding market.