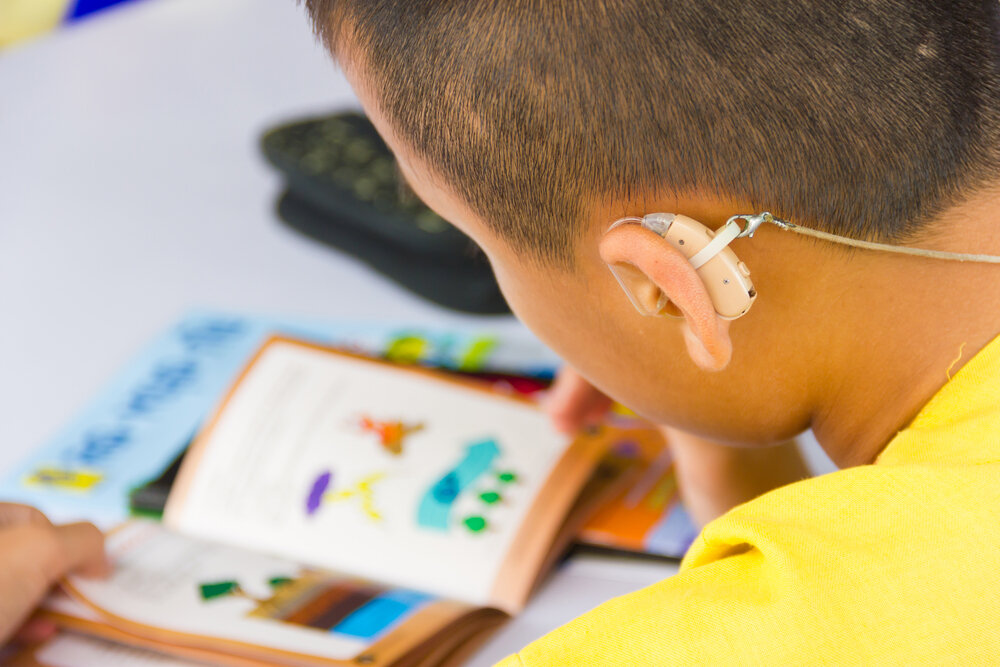 Hearing aids and auditory devices once were extremely cumbersome; the earliest hearing aids were large trumpet-like instruments that one held into the ear, but these devices eventually became more manageable, as hearing devices were developed that fit into the ear canal. These models weren’t discreet, and their auditory amplification also was neither ideal nor perfect. However, the hearing aid eventually evolved into the behind-the-ear model we recognize today.

Today’s hearing aids feature cutting edge technology that can seemingly disappear behind the ear and even tap into smartphones and other devices. Hearable tech trends amplify the future of hearing aids and will help erase the stigma faced by those who are diagnosed with hearing loss.

Unfortunately, earlier hearing aid models—even those a few decades ago—weren’t so visually appealing, and their appearance likely contributed to the stigma faced by those who experienced hearing loss, especially children. Older adults, however, may still equate a hearing impairment to a fragility of old age and view hearing aids as an inherent and outward social weakness.

For children, the visual aspect of hearing aids may be associated with an aversion to wear them. Many kids want to fit into their peer group, and any difference—even slight—may cause a child to feel stigmatized or ostracized. Pediatric hearing aids come in several designs: behind-the-ear (BTE) models, canal aids (fit in the ear canal), in the ear aids (these tuck in the ear) and body hearing aids (for “profound hearing loss”).

An audiologist may recommend a certain design or model that would work best for the child. Hearing loss isn’t the same for every individual; some children may be born with hearing loss and the extent may be severe, but others may suffer mild hearing loss or experience hearing loss from medication. Hearing loss also may involve only sounds on a range of frequencies (perhaps high frequency). The hearing aid must be able to meet the auditory needs of the child.

Today’s hearing aids for kids, however, partner advanced technology with a streamlined appearance. While hearing aids of the past had to be manually adjusted, today’s models are plugged into a computer and adjusted digitally by a technician. The sound quality also has greatly improved.

The appearance also can be controlled by kids. Like glasses, in-canal and BTE hearing aids now come in a variety of colors. When children visit an audiologist for hearing aids, they often can choose from a rainbow of hues for the actual hearing aid. For BTE models, kids also can choose a favorite hue for the hearing aid hook. Even the ear molds (for BTE) can be customized.

Kids can swirl together up to three different colors to create an ear mold that fits their style…and matches their personality. Color combos can be bold and neon, pastel or even clear and conservative. Since children’s ears grow as they do, they can change their molds and their mold designs frequently. Charms also can be added to decorate hearing aids.

The sound quality of pediatric hearing aids, though, is what has evolved the most throughout the years. Many models connect wirelessly and are compatible with Apple and Android smartphones. These tech-savvy hearing devices can be used to listen to music or television shows by bringing the audio into the hearing aid; teens also can stream phone calls into their hearing aids!

Assisted Technology in the Classroom & Beyond

As hearing aid technology has advanced, so, too, has assisted technology for these devices. FM systems are used by kids and adults to assist in hearing lectures, church services, class lessons and other activities.

FM systems work by utilizing a microphone (provided to the speaker) to bring their voice directly into the hearing aid. This bypasses the issue of background noise, which can distract the listener’s attention.

While hearing aids have advanced both in their design and their auditory capabilities, when frequencies are adjusted and amplified by the aids to increase hearing, other sounds may be amplified as well. A hearing impaired child sitting in a classroom may hear their teacher but become distracted by the amplified sounds of rustling paper, whispering or other background noises. Utilizing an FM system allows the child (or adult) to clearly hear the voice—and the pertinent information—over all the noise.

Even FM systems have become incredibly tech savvy. Some now include touch-screen receivers. Other tools, like Phonak’s Roger Pen microphone also connect into a specific hearing aid model. The microphone works a bit like an FM, bringing a speaker’s voice directly into the hearing device. Users also can connect the microphone to a television or other entertainment device.

Many manufacturers design models that can be used by both children and adults (although size and colors may differ). Like children, adult hearing loss isn’t the same for every individual. Depending on the amount of hearing loss, an audiologist may have a specific hearing aid recommendation.

While children may want a fun and colorful hearing aid, adults may stick to conservative hues. Many hearing aids for adults are compatible with smartphones, connecting to devices through Bluetooth.

Adults also may utilize other assistive technology that works with their hearing aid. High-tech table-top microphones can be used in work meetings and can identify when a speaker has changed, adjusting the audio accordingly. Other microphones can transmit audio from the television or other devices.

Hear Everything, See Nothing

While many hearing aid models are visible, some are so tiny that they are imperceptible. These hearing aids fit directly into the ear where they can’t be seen. However, as manufacturer Starkey notes, they might not be for everyone. Individuals with poor fine motor function may find them difficult to place or to remove. Like other models, the invisible hearing aids also can be used to stream music and television shows.

TONELINK™ allows users to control volume and change hearing aid programs. The app also provides users with the option to control the direction of sound to the hearing aid and even mute sound.

Phonak’s app can connect the user to their audiologist, and help prompt any sound adjustments. The app also allows users to create a Hearing Diary so users can document their daily auditory experiences—like “speech understanding” and “sound quality.” The app also tracks how long the hearing aids were used each day.

The development of these apps might seem like a given in our tech-savvy world. Apps, after all, are nothing new. However, what these apps represent to those who rely on hearing aids in their day-to-day activities shows the incredible advancement in technology in a matter of years.

Controlling hearing aid volume was once a task that either had to be done by an audiologist (or hearing professional) or the individual by hand…and sometimes this simple adjustment required bringing out a tiny screwdriver. Now technology has placed much of the control in the hands of the wearer, and simple adjustments are a virtual endeavor. Download the app, connect the hearing aids and take control of the sound. For an individual who was born with a hearing impairment, the app provides more autonomy and less reliance on the medical community for a simple volume adjustment.

Hearing In the Driver’s Seat?

When hearing aids became linked to apps and mobile software, they also were outfitted to work on the go. In our cars, the computer also has taken control. Smartphones link to our vehicles, and entertainment systems now allow us to stream our music, take phone calls and send quick texts.

This gets a bit tricky with hearing aids. Phonak notes that their devices don’t connect with Bluetooth functions in the car. However, since the hearing aids pair with mobile devices, users may simply decide to keep their phone synced up to their hearing aids instead of the car system. Others may switch their phones to connect into the car. Connectivity preferences depend on the individual.

Hearing Aids and the Internet of Things

Oticon’s offerings are beyond what most would assume hearing aids can do—these hearing aids take tech to the next level. Via the Oticon ON app, users can link their hearing aids to many connective devices throughout their home. This means that the wearer will receive messages via their hearing aid that the laundry is finished or someone is at the door; Oticon’s site notes that lights and the thermostat can be adjusted when the hearing aids are turned off…or on.

How do these devices work? A microphone portion of the device sits behind the ear to receive audio, which sends the sounds to the internal implant. Johns Hopkins explains: “The internal part is placed under the skin behind the ear during an outpatient surgery. A thin wire and small electrodes lead to the cochlea, which is part of the inner ear. The wire sends signals to the cochlear nerve, which sends sound information to the brain to produce a hearing sensation.”

We can credit Nathaniel Baldwin for audio headphones; he invented them way back in 1910. Stuff TV notes, though, that it was John Koss who gave us the stereo headphones we know and love. These headphones were invented in 1958…a few years after Elvis began exploding on the radio.

As stereo equipment and sound quality developed, headphones likely evolved, too. In 1979, Sony introduced a headphone game-changer: the Walkman. The portable cassette player allowed teens to play their favorite music without the neighbors complaining.

The Walkman evolved into the Discman, which, of course, played CDs but still had the same concept. Like its predecessor, the Discman let individuals take their music on the go. These portable players made roadtrips, walks and runs so much more enjoyable back in the 80s and 90s.

As compact discs were discarded for music downloads, the CD players we knew and loved—and the headphones that let us listen—became obsolete. Instead, the mp3 player took over. And later the smartphone. Music was digital and hearing technology evolved from foamy headphones to tiny earphones with incredible sound quality. Later, those earphones were stripped of cumbersome cords and received audio wirelessly.

In 2006, Dr. Dre and Jimmy Iovine introduced a line of headphones called Beats that were renowned for their audio quality. Beats products were so successful that Apple purchased the company in 2014. The Beats line now includes wireless earphones and headphones as well as speakers.

The Mic Is On…the Headphones

As the coronavirus pandemic swept across the country and shut down businesses, many industries pivoted office environments to work-from-home virtual spaces. Videoconferencing became the norm, and many employees likely used hearing technology in these meetings.

Headphones equipped with microphones allowed many at-home workers to drown out background noise (like kids!) while participating in meetings, interviews and conferences. Many of these headphones are equipped with Bluetooth to sync up to devices.

The Future of Hearable Technology?

While hearing aids may have some limitations, the future of hearing technology will probably lead to incredible advancements in user control and connectivity. Hearing aids will likely start adapting to all the tech in our lives, maybe even our cars.

Hearing technology for everyday life also will continue to advance. Ashcroft already created the first IoT headphones, which actually recognize the music you love and downloads songs accordingly. The possibility of IoT headphones, however, will likely lead us to giving commands to Alexa to turn off lights, brew coffee or order pizza while then continuing to stream our favorite tunes.

Technology is always advancing, and the evolution of sound and the technology that controls it will take our ears into the future.