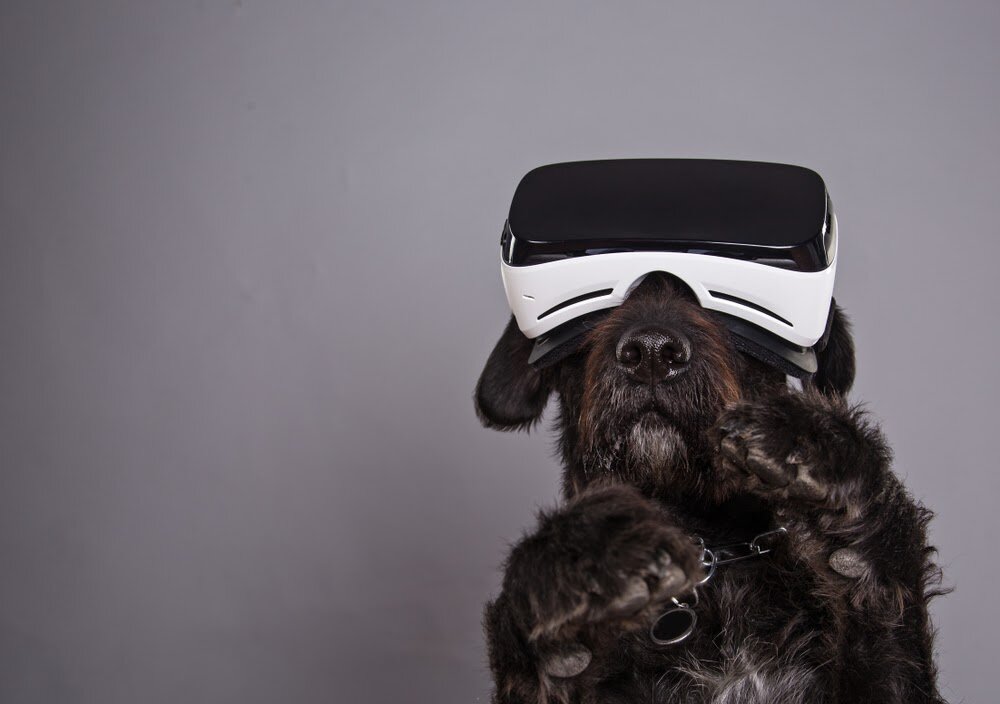 This technology is actively being developed to help dogs safely perform deployment tasks without the need for a trainer to be close by. Removing the need for hand signals and physical cues allows trainers to give commands remotely, while providing the dogs with a higher level of support.

Command Sight has been working on developing AR technology for working combat dogs since 2017. Founder Dr. A.J. Peper started this small company to help military service dogs receive and respond to instructions from their handlers.

In fact, most of the initial research has been performed using Peper’s own pet, which is a Rottweiler named Mater.

Using the AR-enabled goggles, dogs can determine the location of a possible explosives cache or enemy troops using guides and cues displayed in their eye line. Removing the use of conspicuous hand signals and laser commands protects both the Army handler and the dog from enemy attention.

Augmented reality is also a more discrete and flexible replacement for audio cues, such as walkie-talkies and verbal commands.

Initial U.S. Army trials with augmented reality goggles for dogs have determined that trained animals are able to recognize highlighted digital elements that are within their natural line of sight. This eliminates confusion, without the need for attention-grabbing commands that can put the dog and handler in immediate danger.

Combat dogs have played a major role in the military for decades. From drug and explosive detection to strategic attacks, military dogs are a vital asset across every branch of the U.S. armed forces.

However, traditional training techniques leave dogs and their handler’s vulnerable to distraction and detection. Dogs typically rely on hand signals, verbal commands, and tactile cues to respond to commands. This can cause problems when a dog’s assistance is needed in the field.

Hand and voice signalling puts handlers at risk of unwanted attention, and external factors can heavily impact a soldier’s ability to successfully communicate with their combat dog.

Using virtual cues creates a buffer for dogs and their handlers in the event of a rescue operation or other dangerous scenario. This will also increase the level of support dogs are able to give soldiers, by reducing the need for their handlers to join them side-by-side in combat.

Due to their heightened sense of smell and hearing, dogs perform exceedingly well in explosive hunts and operations involving dangerous materials. Giving commands virtually over the dog’s active line of sight helps them to do their jobs unobstructed, and without endangering their human handlers.

While dogs are better equipped for a wide range of combat tasks and operations, risk to military animals should always be minimized as much as possible. US Army trials augmented reality goggles for dogs have shown that AR gives dogs more autonomy, while also reducing the risk of collateral damage.

Using augmented reality goggles as a training tool allows handlers to give commands remotely, independent of their location. Instead of staying within the dog’s line of sight, soldiers can communicate with their dogs virtually.

This eliminates the handler’s need to join their dogs in dangerous or volatile situations. Additionally, this protects the dogs by preventing additional attention from putting them in harm’s way.

Dogs can use augmented reality to receive directions in real time without physically connecting with their handler. This is especially helpful when either party is in the midst of a dangerous environment.

Combat dogs are essential for domestic and international military operations, and augmented reality goggles are just another tool that’s helping to make their jobs safer and easier.

The concept of using wearable technology for combat animals isn’t brand new. In fact, military dogs have been accustomed to using goggles as protective gear for a while. Protective eye and headwear is used to protect combat dogs from environmental hazards, shrapnel, and even air drops.

Since military dogs are already used to the look and feel of goggles, adding augmented reality capabilities has been a fairly seamless transition.

Now, dogs are being trained to recognize visual commands through the goggles as an augmented reality projection. This has proven to be even more effective than silent cues like laser pointers, since lasers aren’t able to bend around corners. Instead, dogs have a more accurate sense of direction using illuminated or highlighted focus points through their AR-equipped goggle headset.

By using the visual information from the dog’s goggles, U.S. Army handlers are able to key points of interest. These subtle details can mean the difference between life and death for the soldier or the dog.

With the assistance of augmented reality in a real-life situation, handlers and dogs can be protected from hostile attacks and active fire.

As the U.S. Army trials augmented reality goggles for dogs, military service animals are being given a way to build their skill sets safely and out of harm’s way.

Training and command implementation are the most important aspects of using working dogs effectively in a combat environment. When it comes to communication between military dogs and their handlers, less is more and every second counts.

In a dynamic and volatile combat environment, soldiers and their service dogs can not afford to waste any time on misfired or distracting command methods. They also can’t afford to risk giving up their position or physical location as a result of conspicuous communication tactics.

Once fully wireless augmented reality goggle technology is available for the U.S. military, deployments and domestic operations will become safer and more efficient for everyone involved.

Although combat canine units have been utilizing wearable technology for years, augmented reality developers are still in the initial stages of the applied use for military dogs.

This revolutionary system has passed the initial phase of official testing. But, as the U.S. Army trials augmented reality goggles for dogs continue, there are still two more critical phases to complete.

Augmented reality doesn’t exactly function the same way for dogs as it does for humans. Humans rely on more audio and visual elements to communicate effectively, while animals are able to recognize more simplified cues.

Instead of giving the dog a digital image of the trainer, augmented reality goggles give the dog one-dimensional commands. The purpose of this technology is to simplify the training tactics being used between the handler and animal, not to effectively replace in-person interaction.

Also, using goggles that are outfitted with cameras allows handlers to see from the dog’s point of view. Soldiers can take advantage of the live feed that is being recorded via the dog’s AR headset, and they can help to guide the dog by sharing their actual perspective.

In current applications, cameras are instead fixed to the dog’s back harness. Using the goggles to see from the animal’s perspective provides soldiers with more control, and a much higher level of visibility. Additionally, this positioning helps to stabilize the live video feed for a clearer picture overall.

But, these capabilities will likely expand with more widespread adoption across different departments and command functions.

When it comes to the innovation and development of augmented reality for military service dogs, this is just the beginning.

Current versions of this technology included a wired headset, requiring the handler to still be within close proximity to the subject. But, developers expect to bring a wireless version to the market in the next two years.

Perfecting a wireless model will provide dogs and handlers with even more freedom and, in turn, safety while they’re out in the field. Eventually, real-life applications will help soldiers to obtain critical operation information, identify explosives, and evade enemy contact.

Once a wireless model becomes available for general testing and production, U.S. Army researchers can work on enhancing the technology for different dog breeds and activity capabilities.

Augmented reality is becoming an increasingly important part of mainstream technology, so it’s no surprise that the military is utilizing AR to improve day-to-day operations. Increasing safety by improving communication between military animals and their handlers has great potential to prevent dangerous incidents from endangering soldiers or combat dogs.

Command Sight is just one of the leaders in this growing sphere, but augmented reality is certainly here to stay.