HOW VR AND AR ARE CHANGING THE CAR-BUYING EXPERIENCE 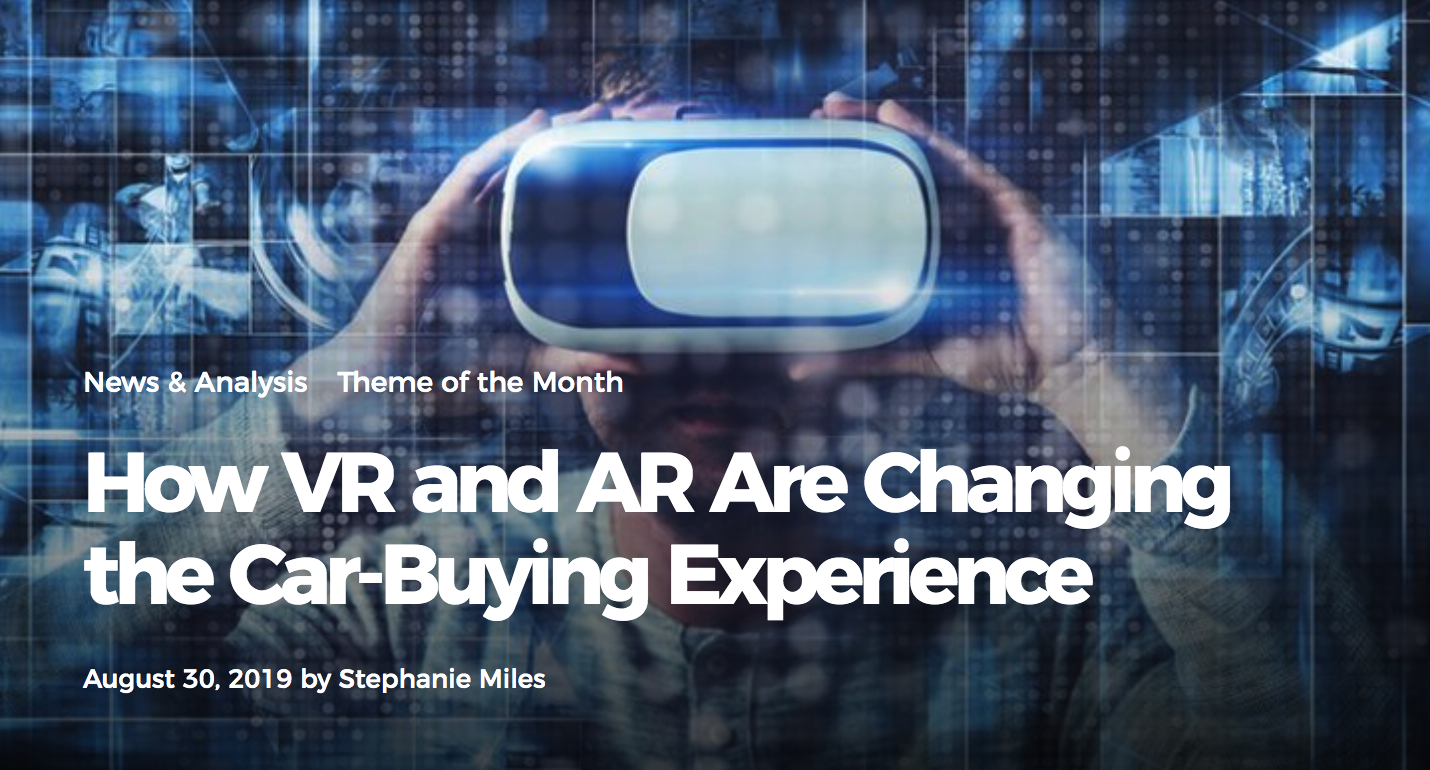 The car-buying experience is almost universally loathed. In-person negotiations are a hassle, and spending the day going from dealership to dealership to test drive cars is an experience that most consumers want to avoid at all costs.

Those hassles are one of the reasons why it takes consumers an average of six months of research before settling on which car to buy. In a survey conducted by AutoTrader, just 17 out of the 4,002 consumers polled said they were satisfied with the current car-buying process.

Dealers aren’t happy with the situation, either. Getting people into auto dealerships is becoming increasingly difficult, and millennial customers, in particular, are resisting taking part in traditional dealer/customer negotiations.

Although research shows that baby boomers prefer to touch and feel vehicles, and they will go to multiple dealerships to look at cars, that’s not necessarily the case with younger buyers. Millennial shoppers are doing most of their car buying research online, using popular platforms like Google and YouTube.

The problem is that new cars are incredibly expensive, and most people don’t feel comfortable picking a vehicle based exclusively on two-dimensional images and whatever data they can pull up on the Kelley Blue Book website. Consumers don’t want to go into dealerships, either, so they end up delaying their purchases for as long as possible.

RelayCars thinks it has a solution.

The company has put together a program that uses augmented reality (AR) and virtual reality (VR) to help consumers research new cars and trucks. Getting a realistic view of a vehicle from their own homes helps users narrow down their selections and decreases the time shoppers need to spend test driving multiple cars.

RelayCars’ app is powered by EVOX Images. If that name sounds familiar, it’s because EVOX Images isn’t a newcomer in the automotive space. The company has been working in automotive photography, by capturing HD car images for commercial use, for two decades. Its images are used on more than 20,000 dealership websites, which means most people who’ve shopped for a car have seen an image from EVOX.

Using EVOX’s VR automotive asset library, RelayCars gives its users a way to place themselves into the driver’s seat of almost any vehicle. The company’s app is platform agnostic, and consumers who don’t have VR headsets can still get the full experience by downloading the app on iOS or Android.

“Once we put RelayCars on the app store for general consumers, we pulled in over 1.2 million downloads,” says Callari.

Part of the magic behind RelayCars is its standardization of imagery. The company has a 40,000 square foot space where it shoots its vehicle, all with the same consistent lighting and angles. This means consumers are really able to understand and compare different cars.

Although RelayCars is available in both VR and AR, Callari says there has been slower mainstream adoption for headsets, outside of the gaming industry, and because of that, growth has been slower for in app’s VR version.

Callari says RelayCars is currently the only automotive app developed for Magic Leap, and the company is continuing to develop for headsets to stay ahead of the curve.

On the dealer side, the biggest barrier to adoption for RelayCars has been a lack of actual inventory on dealer lots. A consumer might look through a headset and see different vehicle options and colors than what the local dealership has available to buy that day, and that can sometimes be a problem.

In order for RelayCars to continue to expand and grow, the company will need to form more partnerships within the automotive industry. EVOX already provides images to more than 20,000 dealerships, and the company works closely with manufacturers like Kia and Subaru, but Callari says even more partnerships are in the works.

“The entire car shopping experience is changing and is already much different than even five years ago … By 2020, millennials will be the largest car buyer demographic, which is why it’s so important that dealers understand their shopping and buying habits,” she says. “Our goal as a company is for RelayCars to become an integral step in the car research process. When someone is looking for a vehicle, and thinking of ways to research that vehicle, we hope they’ll go to sites like Kelley Blue Book or Edmunds.com for data and editorial, to YouTube for videos, and to RelayCars for the VR/AR visual aspects.”

Stephanie Miles is a senior editor at Street Fight.