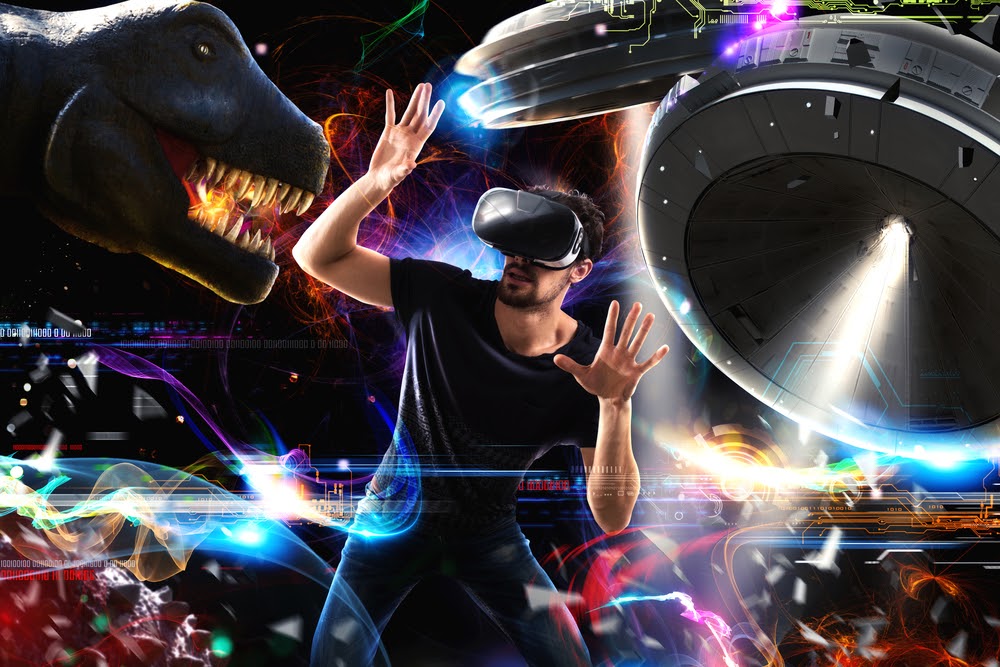 For parents who might be looking at virtual reality technology for their kids perhaps as a holiday or birthday gift, there are a lot of different options for headsets and games on the market. But anyone can enjoy the unique experience of virtual reality gameplay!

Ready to get into the game—literally?!?! Here are some of the virtual reality offerings to try as a newbie VR gamer.

Before delving into product and game options, it should be noted that some people (yes, gamers included!) don’t do well with the virtual reality experience. Some may feel disoriented, a bit queasy or have a headache.

This experience isn’t the norm for everyone, but some individuals are just a bit more sensitive. This condition is technically called ‘cybersickness,’ and an optometrist interviewed by UNSW Sydney explains that it’s similar to motion sickness.

However, while motion sickness—like feeling nauseated while driving or on a boat—happens because of motion, cybersickness, the optometrist explained, does not. Instead the sickness felt using virtual reality is essentially the body being confused.

The body knows it’s not moving, yet in the virtual reality world, movement and action are happening. The senses are essentially jumbled, and this is termed ‘sensory conflict.’

UNSW’s article goes on to explain that newer headsets might be less likely to cause cybersickness, although some people could still experience it.

Dramamine, the anti-nausea medication that helps with motion sickness, listed ways that gamers or anyone using virtual reality can help prevent and deal with cybersickness. The company recommends always reading instructions and warnings on virtual reality equipment, only using the tech for short periods to help acclimate, to give the body rest between uses and to stop using virtual reality if the user doesn’t feel well (or if the user is sick!).

Gamers (and their parents!), though, might be used to seeing and spending higher prices for the gaming experience. New consoles are priced higher when they are first introduced. While virtual reality isn’t necessarily a new technology, like most tech it is improving and evolving.

Some users and gamers absolutely love virtual reality, but, as many gamers know, everyone has a personal preference for the gaming experience. For those interested in testing out the technology, here are a few things to consider:

For virtual reality headsets, there are several on the market that are great for gaming. Some are on the high-end of price, but others are more budget-friendly. Keep in mind that when using a headset with a particular gaming console compatibility could be an issue (check this first!).

Also, some parents when gifting a headset for their gamer might not want to spend a fortune for their first headset. There are many moderately priced options. And some younger players could move on to the next big thing (as kids do).

For gamers, here are headset options and their prices:

These headsets are recommended for PC gaming (thus why many are on PC Gamer’s list). Software Testing Help breaks down the compatibility for the headsets for buyers who need to know. For example, Oculus Quest requires Android, HTC Vive requires Windows 7, 8 or 10, and Valve Index is for PC.

What are the Most Popular Virtual Reality Games?

Gamers might download games via Steam, which is a virtual reality gaming store. Steam lets users choose games via their headset compatibility, so titles could vary depending on the headset.

However, Steam also lists its top-selling games. Currently, the 10 most popular titles include:

Prices for games via Steam are comparable to the cost of other video games. The top-selling titles range in price from $17.99 (for Fallout 4 VR…it’s on sale!) to $59.99 for The Elder Scrolls V: Skyrim VR and Half-Life: Alyx.

What About Sony PlayStation VR?

For those who own a PlayStation 4, the Sony PlayStation VR headset could be alluring. PlayStation currently offers some bundle downloads via its website for the VR system. And buyers can still find headsets and bundles online.

The bundle at some retailers is priced around $500 (these seem to be from online sellers, however). This includes the headset, accessories and some games. Again, for those with a compatible PlayStation, this headset could be a less expensive way to try out the technology. Used options also could be cheaper.

Augmented Reality is Another Accessible Option

For some buyers, a virtual reality headset may simply be too expensive. However, there is another way to experience immersive gaming! Augmented reality games are available via many smartphones and tablets.

An example of augmented reality gaming is the incredibly popular game Pokemon GO. The camera of the phone shows the real world, and the graphic Pokemon appear within the environment.

Download augmented reality games and apps via Apple’s App Store or Android’s Google Play. Titles may vary depending on the device. However, many titles are available for both Android and Apple devices.

Augmented reality games also might not cause the same cybersickness as virtual reality. As graphics appear in the real space, there really isn’t any motion or sensory confusion. However, everybody could have a different experience. Even looking at a computer screen affects some people differently!

So how much do augmented reality games cost? Many titles are free! Others might be nominally priced. Games could include the option to make in-app purchases; some users aren’t concerned about this. Others, though, might have children who don’t understand that they are charging their parent’s account. Disable the in-app purchase option via the phone or device for gamers that don’t want the hassle.

Other Ways to Experience Virtual Reality

Gaming via virtual reality doesn’t have to mean that consumers must invest in their own headset. There are many places that offer virtual reality gaming experiences. Yes, these will come with a price. However, trying out these experiences also could help gamers better understand if they like the tech…or if they are sensitive to virtual reality.

Even museums could offer virtual reality experiences. Check out the local history or art museum to find out if virtual reality is part of any exhibition. Details could be found online.

Google’s in on the virtual reality experience, too. Google explains that smartphones can be transformed into virtual reality viewers. The experience is called Google Cardboard. And the phone is attached to a cardboard headset.

These cardboard headsets range in price, but many are less than $20. Just be sure to find the viewer that fits the phone screen! While some Google experiences are only compatible with Android, many Google Cardboard apps can be used with both Android and iOS.

When deciding on a headset, though, gamers might consider the price and the headset’s compatibility. Parents purchasing as a gift might also think about the interest of their teen. With virtual reality, though, gamers become a part of the game…and it’s a unique experience that can transform the gameplay.