Why Does Virtual Reality Make Some People Feel Sick? 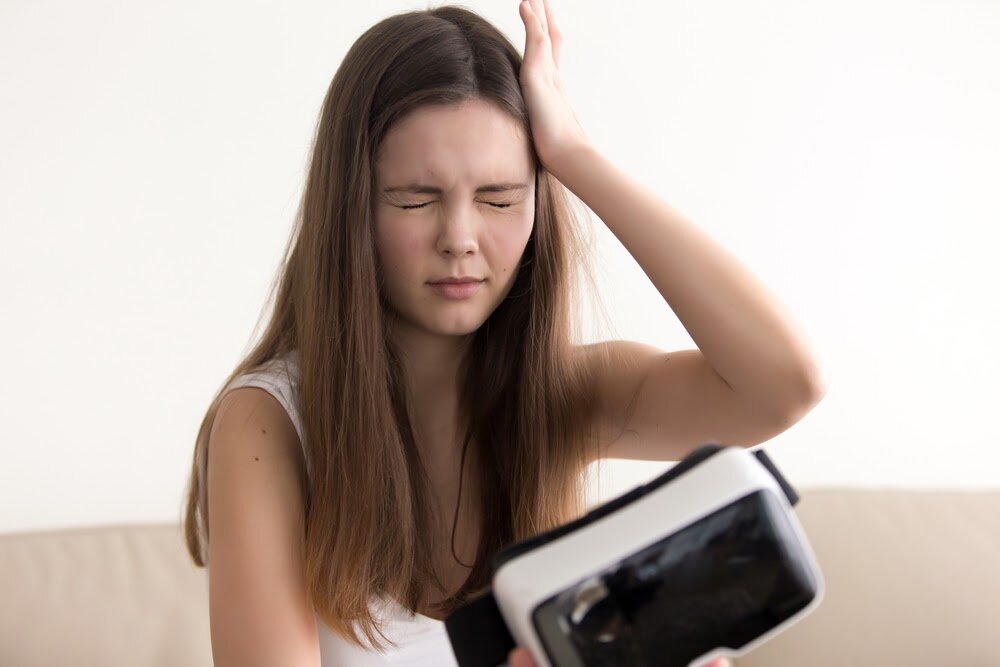 For some, it is surprising that virtual reality ends up making some people sick. After all, virtual experiences between friends are meant to be fun and a way to escape from reality.

Yet, the sickness caused is very real for those who suffer. The impact on a person can range from a mild headache to a total blackout. The problem is, most people don’t know if they’ll be affected until they try. Only those with related conditions impacted by lights or rapid visual movements are likely to have any awareness of the potential of feeling unwell from virtual reality games or experiences.

Motion sickness is commonly known about throughout the world, particularly in regards to boats and cars. Seasickness is often largely triggered by the rocking motion of the boat and not much can be done to help the person feel ‘balanced’ (although some say that looking at the horizon can help). Almost all car drivers will at some point in life experience someone being sick in their car from motion sickness, while not the end of the world, it can be embarrassing for the person and also a cleaning nightmare for the owner.

The simple truth is that some people are more sensitive to motion and balance changes than others. There are sometimes fixes, but for those that suffer, this sensation can completely ruin a boat trip or virtual reality experience that was intended to be some fun times with family and friends.

So, here we look at what causes this phenomenon and some ways that it can be reduced in order for everyone to be able to enjoy the wonders that virtual reality has to offer.

It is known by manufacturers that certain conditions can be triggered by virtual reality headsets. For example, the makers of the Oculus Rift headset clearly state:

“Some people (about 1 in 4000) may have severe dizziness, seizures, eye or muscle twitching or blackouts”

This is regardless of whether a person has had a previous issue, although that would certainly increase the likelihood that they could be one of the ones affected. One person in four thousand doesn’t sound like a lot, but let’s put that into perspective:

In many cases, this is triggered by either the sensation of movement that isn’t matching what the body is sensing or by light flashes or patterns that trigger a feeling of nausea, dizziness, seizures, or even total blackouts.

Fortunately, for most without serious issues such as epilepsy, many would only experience temporary discomfort from the virtual experience. But, the risk of something serious occurring increases if people play for extended periods, so be sure to take breaks!

What is Virtual Reality Motion Sickness?

Well, virtual reality is quite a unique experience for the body. Our bodies and brains crave balance, and in general, that’s exactly what happens with our senses working in synergy. In the normal world, our senses work together and provide feedback on what is happening.

However, in a virtual world, what is happening is often quite different from what our senses tell us. We could be in a boat or on a rollercoaster in the virtual world but are simply standing in the living world in the real world.

It has been suggested that the cause of sickness is because the brain interprets the ‘incorrect signals’ from the body (as the real world senses don’t match virtual world effects) as intoxication. It possibly assumes that a person ate something poisonous or that the body is ill in some way, resulting in the feeling of nausea.

Others have also suggested that lags in response times between a real-world action and it happening virtually could be the reason. The truth, however, is that no one really knows yet but that it is a real problem for those who suffer the effects.

Many believe that it is this crossover of senses that lead to people feeling sick. Our balance is telling us that we are stationary, but our eyesight and hearing are telling us that we are moving differently in the virtual adventure. It confuses the brain for some people and causes different reactions, of which nausea is a common effect. This is often referred to as simulator sickness or cybersickness.

Wearing the headset can cause other discomforts, with rapid flashing lights and high-speed games, people can suffer from headaches, sore eyes, blurred vision, and other aspects that can also contribute to the feeling of nausea.

Anyone experiencing these feelings should take a break. While the symptom might be ‘ignorable’ to some degree, it could also be an early indication that a person is sensitive to virtual reality and it isn’t worth risking a seizure or blackout just to finish a level in a game.

How to Play Virtual Reality Games Without Feeling Sick

While not perfect or instant cures, there are many ways to reduce the effects of virtual reality sickness. The idea is to try and get the body to adjust to the virtual experiences, without the person pushing their limits and causing further or more serious issues.

Consider trying games with other supporting devices. Driving games with a car seat that moves in response to the game or other interaction assists like virtual gloves can help senses connect more with the virtual world.

Another approach is to try playing while sitting down. Some games even have an option for this. The benefit is multifold, as firstly the user’s brain has the comfort of knowing that they are seated, the game can match what they are feeling in the real world, and of course, they can’t fall over easily and hurt themselves.

Finally, a breeze often helps those on boats and who get sick in cars. One of the first responses to motion sickness is to open a window or get up on deck. The breeze really can help a person feel better and is easily created at home with a fan.

Of course, users can combine all of the above solutions as well. Start with games that are sitting compatible, have a fan near the game area (don’t make the breeze too strong), and maybe include some other devices that stimulate the senses and distract the brain from the real world sensory inputs.

Preparation can also play a factor in how people feel. If playing a game after a night of drinking, even the most hardcore virtual reality gamers could end find themselves feeling a little green. So, once someone knows that they are sensitive, they should consider:

Virtual reality is mostly used for gaming and training at the moment. While some other uses are developing in industries, such as designing automobiles for manufacturing or virtual car showrooms, a lot of the virtual reality industry’s revenue is earned from education and entertainment.

Regardless of the source of income, most of these uses are not ‘required’. They are not a necessity where users are likely to be willing to endure feeling sick to use virtual reality, unlike using a car or ferry as a part of traveling somewhere.

Because of this, it is important that producers of virtual reality headsets also have a focus on making it usable by as many people as possible, if not everyone.

As lag has been highlighted as an important factor in causing nausea, manufactures can look to increase refresh rates as much as possible. This would help to reduce the lag in games and also to provide a smoother and more realistic experience.

This could also be combined with devices that allow the user to experience the ‘real’ sensory feelings of the virtual world. Devices such as treadmills that allow people to walk and run in the real world to control the virtual world. These devices could also tilt or adjust to fit the landscape. Sensory suits may also help, but the full effect of all of this is yet to be tested much, due to the present high costs of such devices.

So, for those that suffer, at least for now, mixed reality or augmented reality headsets could be the best solution. Allowing fun virtual elements in the real world, and thus, overcoming a lot of the sensory conflicts caused by full virtual reality experiences.