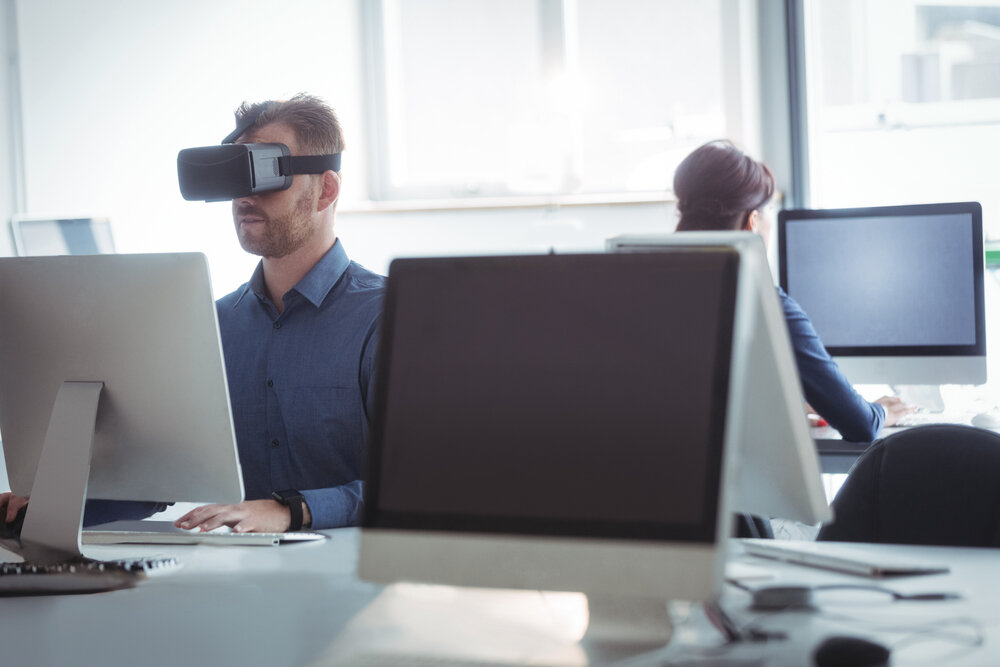 Augmented reality is technology that allows users to overlay information and digital objects onto their real-world environment. Although it is often associated with the gaming world, augmented reality technology is actually utilized in many other industries.

Retailers, for example, use augmented reality technology to give consumers the power to virtually try on clothing items or cosmetics from the comfort of their own home. Consumers can see what a specific shade of lipstick would look like on their face without ever seeing the item in person. Automotive manufacturers use this technology to create virtual showrooms for consumers who want to shop for a new vehicle without stepping foot in a dealership.

These are two examples of ways that augmented reality has been used to enhance the shopping experience for consumers. But augmented reality can also be used in other ways, including for educational purposes. In fact, geology professors across the country may start to utilize this innovative technology to enhance the learning experience for their students.

The Challenges of Teaching Geology Today

Teaching is never easy, but this is especially true when it comes to teaching geology. Professors who teach geology face a unique set of challenges that professors in other departments may never encounter.

It’s hard for students to comprehend some of the complex topics in geology without having physical models to reference. For instance, looking at a picture of a crystalline mineral structure is not the same as being able to see the structure in person. Without this type of physical model, students may not be able to visualize and comprehend the concepts they are taught.

This isn’t the only challenge that professors face when teaching geology. In other science classrooms, students can typically recreate or observe the concepts that they are studying. For instance, a student in a biology classroom may dissect a frog or other small animal to observe its organs. A chemistry student, on the other hand, may conduct experiments in the classroom to recreate a specific reaction that they are studying.

But it is impossible for geology professors to provide students with this type of hands-on activity. After all, there’s no way for geology students to recreate an earthquake, volcano, or ocean current in the classroom. As a result, geology students do not get the benefit of learning from hands-on instructional activities. Instead, these students must learn strictly from listening to lectures, analyzing photos, watching videos, and reading text.

The Use of Augmented Reality in the Geology Classroom

Geology professors may be able to overcome these challenges and enhance the learning experience for their students thanks to augmented reality technology.

Students and professors can use augmented reality technology to overlay digital objects onto their real-world environment in the classroom. For example, a geology professor may not have access to physical models of the various types of rock formations and crystalline mineral structures.

But this doesn’t mean that students are limited to looking at still photos of these objects. Instead, augmented reality technology can be used to project 3-D visualizations of these objects onto a student’s desk. This gives students an opportunity to analyze and evaluate the object just as they would if it was a physical model. But unlike physical models, these digital objects don’t take up space or cost a fortune.

How Can Professors Use Augmented Reality to Teach Geology?

A group of developers are currently working on a series of augmented reality apps that can be used to help professors teach geology to their students. The apps are available for use on augmented reality headsets, such as the Microsoft HoloLens, as well as Apple and Android smartphones.

The first app created by this group of developers allows users to explore USGS earthquake data in 3-D instead of a 2-D map. Using this app, students can learn more about the geometry of the planet’s tectonic plates. This app can also help students understand the science behind how and where foreshocks and aftershocks occur before and after an earthquake. Being able to visualize this information in 3-D makes it much easier for students to grasp this difficult concept.

These developers also created the GeoXplorer app, which is available for Apple and Android devices now. Students can use this app to explore 3-D models of various crystalline structures in the classroom. Instead of just looking at pictures of these structures, students can get a detailed look at how these structures are formed and how the atoms are arranged.

Students and professors can even take virtual field trips using the GeoXplorer app. Instead of exploring a single rock or crystalline mineral structure, students and professors can use the app to take a virtual field trip to an actual rock outcrop, which is a large rock formation. Being able to virtually explore the physical features of the planet without leaving the classroom can drastically improve students’ learning experience.

As of right now, these apps are only designed for solo experiences. But the developers hope to build upon the apps to make it easier for professors to use them in the classroom.

For example, in the future, a professor may choose to use their smartphone to project a certain 3-D digital image of a crystalline mineral structure. Then, the professor could invite their students to join the session, which means every student would get to explore the same 3-D digital image at the same time. This would greatly enhance the geology classroom experience—especially for remote students.

The developers also hope to add new 3-D visualizations to their apps in the near future, including interactive simulations. For instance, researchers at Columbia University are currently working with the app developers to create a glacier interactive simulation that allows students to see how glaciers grow and shrink over time. This type of simulation will help students build upon the knowledge they have acquired by reading textbooks and listening to lectures.

Every geology professor should take advantage of these augmented reality apps to create an unforgettable learning experience for students.

The Use of Augmented Reality Outside of the Geology Classroom

There’s no doubt that augmented reality technology should have a place inside every geology classroom. But this technology can be used to enhance the learning experience in other classrooms, too.

Students in medical school could benefit from the use of augmented reality technology, too. Augmented reality could give these students the unique opportunity to explore human anatomy in a way that has never been done before.

Schools may not need to budget for field trips anymore thanks to augmented reality technology. Now, teachers have the power to take their students to far off destinations without ever leaving the classroom. Students can explore the pyramids of Egypt one day before jetting off to Machu Picchu in Peru.

Students of all ages can benefit from augmented reality technology. In fact, there are a number of augmented reality apps that are designed to help students in elementary school learn basic counting and reading skills.

Other apps are designed to help elementary school children stay physically active. For example, physical education teachers can project digital objects onto the wall of a gymnasium and encourage their students to throw balls at the wall to hit as many digital objects as they can.

Augmented reality is still a fairly new technology, so educators may find even more new and exciting ways to use this technology as it continues to grow in popularity. But for now, it’s safe to say that augmented reality may make it easier—and more fun—than ever before for students to study geology.